Erika Shankley is a Wildcare volunteer whose unbounded enthusiasm contributes to Wildcare efforts across the Board (literally – Erika is a current Wildcare Board member). In this changing world, Erika hopes to be able to find emerging opportunities to further enhance the natural values of Tasmania’s wild areas. We hope you will join her. 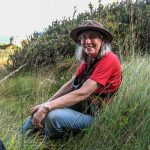 Erika rests in the grass on Tasman Island – Chris Creese 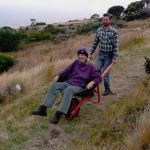 Erika’s volunteering expeditions predate the inception of Wildcare (which she joined in 2002).  Following a working life in an office, what better than to venture into some of Tasmania’s more remote areas? Trips to Port Davey in the ‘60s (by foot or boat) included the pleasure of a visit to the home of Deny and Margaret King and their daughters Mary and Janet at Melaleuca.

“Before heading off for a bushwalk (for which Deny usually provided boat transport) we would help collect firewood, pick cherries from their garden (for them to make jam) and even have a shared meal at their unique home on the banks of Moth Creek.”

Back in Hobart in 2000, Erika joined a group of like-minded people in the formation of the Melaleuca Port Davey Advisory Committee, a body which worked in partnership with the Parks and Wildlife Service to formulate policy for this remote and fragile region.

In 2002, she spent three months on Maatsuyker Island, as part of the volunteer caretaker programme run by the Tasmanian Parks and Wildlife Service.

“This was a life-changing experience, living on the most southerly lightstation in Australia, at one with nature on a daily basis. Apart from weather observations for the Bureau of Meteorology in Hobart, we assisted with reserve management, maintained the lightstation buildings and the cultural and natural heritage of the island. While mowing the 3.5 km track across the island we had plenty of time to observe the unique fauna and flora of this remarkable island!”

Erika has been a member of the Friends of Maatsuyker Island since its inception in 2003.

Her stint at Maatsuyker led to two years on Swan Island (2002-2004) – a private island off the north east tip of Tasmania, in the tempestuous waters of Banks Strait. Here work involved managing the island for the private owner, Vladi Private Islands, and catering for guests as well as building maintenance, clearing tracks, mowing, etc etc. Mail and groceries came once a fortnight by air from nearby Flinders Island. Two years in this idyllic spot with its beaches and lichen covered rocks was a dream come true, which unfortunately came to an end when the island was sold.

Three Hummock Island, once home to the Alliston family off the north- west coast of Tasmania, was her next venture as a volunteer caretaker in 2005. The island is a State Reserve with a small area of leasehold around the settlement. Here too, there were guests to cater for, tracks to clear, vegetables to grow, firewood to cut and a multitude of other jobs needed to keep the settlement at Chimney Corner in good order. There was also a lighthouse, but it had been burnt down in the 1960s and its replacement, a small ‘tupperware’ fibreglass light, was a long walk from the homestead.

In the following year, 2005, together with her son Chris Creese, Erika spent a day on Tasman Island with the Rotary Club of the Tasman Peninsular and reflects: “What an awe-inspiring place! It was here that I met Carol Jackson, who had lived on the island as a child. We were dismayed at the state of the former lightkeepers’ quarters and environmental weed infestations. I became an inaugural member of the Friends of Tasman Island when it was formed soon afterwards. I have since co-ordinated and participated in a number of working bees on the island and continue with support activities back in Hobart.”

In 2008, Erika tapped into the ‘grapevine’ of volunteering opportunities and and headed to Fraser Island, Queensland to volunteer at the Sandy Cape lightstation. “Here we spent 4 months working in partnership with the Queensland Parks and Wildlife Service, maintaining the lightstation buildings and surrounds. My lasting memory is the many hours spent trying to rid the surrounding bushland of the invasive weed Asparagus fern (Asparagus africanus) a declared noxious weed.”

Following a long association with Melaleuca as a bushwalker and sailor, Erika joined the Friends of Melaleuca at its inception in 2009 and has participated in a number of working bees. Work is evenly split between the historic King/Fenton residence, the Willson residence, historic mine structures and the intervening parts of the South West National Park. She also volunteered in the setting up of the Deny King Museum, sited in the old Orange-bellied Parrot bird hide at Melaleuca.

BRINGING IT ALL TOGETHER

“Wildcare as an organisation is the glue that binds the many groups, under its umbrella, together.”

Motivated by the sense of belonging that comes from sharing with other like-minded people, Erika joined the Wildcare Board in 2016 “hoping to work with other Board members towards the enhancement of the natural values of Tasmania’s amazing number of wild areas.”

To Erika, “volunteering has become a way of life – a way of giving back to the environment that which modern civilisation has taken away.”

She is motivated by her love of the environment, particularly the more remote areas, and the need in this day & age to continue to look after these places for future generations.

“I really look forward to heading off into the bush or to an out-of-the-way place, volunteering with like minded people, all hoping to make a difference.”

In this changing world, Erika hopes to be able to find emerging opportunities to further enhance the natural values of Tasmania’s wild areas.

We hope you will join her.