It’s been a great year so far for Crag Care

Crag Care update first half of 2022

Well Crag Care has had a busy few months, with four working bees run so far this year all at different Tassie climbing areas. Three of those areas – Freycinet, Fingal and kunanyi Organ Pipes were new for us, so it was pretty exciting to get the opportunity to do some hands-on work looking after these places. Here’s a bit of a roundup of what’s been going on! 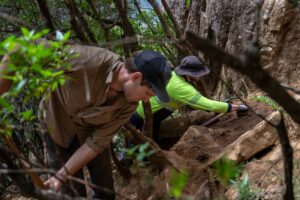 The cliffs of kunanyi hold a special place in many people’s heart, and for climbers particularly those that live in Hobart, it’s a magical place that keeps you coming back. The focus of this working bee was some degraded and eroded stonework at the base of several popular climbs called ‘After Midnight’ and ‘Pleasant Screams’ on Flange Buttress. The Hobart City Council Bushcare trackwork team brought the skills and expertise (thanks Lindsay, Jerome, Pete and Logan!) and we worked with them to put in place a couple of belay platforms that will control erosion and support the surrounding plants in that area. We also did a bit of pruning of some overgrown parts of the approach tracks. The sun was out, rocks were moved, tea was drunk and it was a pretty good day all up. 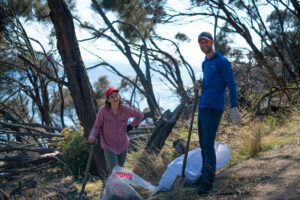 White Water Wall is  another hugely special place for the climbing community, one of the few places where there is camping right next to the cliffs. The energy was good for this one and we got a bit done! A little crew headed down to Bluestone Bay and removed 2 big bags of thistles. Others headed over to Alchemy Wall with Parks Ranger Steve Everts and cleared a bunch of fallen trees, which were causing erosion and track braiding. The boys did a bit of work around the campsite straightening bollards and the majestic dunny team led a full spruce-up of the beloved White Water Wall Loo! Graffiti was painted over, the deck oiled and sanded, walls washed and brushed down- that dunny could be Air BnB’d! Big thanks to Freycinet Park Ranger Steve Everts (who looked after us on the day), Fi Everts and Steve Heggie who did so much of the behind-the-scenes leg work to make the day happen.

Duckreach is a gem of an area in Launceston Gorge. In this working bee the crew carried on with their work, removing weeds such as blackberry and Elisha’s Tears. Rubbish was collected including some big pieces that may have washed down the River at some stage and become lodged on the river bank. The area is already showing huge signs of improvement as a result of this and previous working bees with significantly less weeds around the climbs. Thanks to everyone who came along and particularly to Launceston City Council (LCC) for their support! Here’s a terrific little video about the day that was made by LCC. 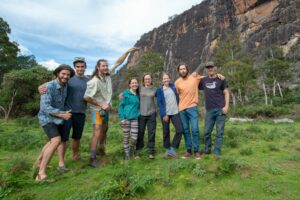 Bare Rock at Fingal is a popular winter climbing destination, with the property at the base owned by a local climber who allows climbers to camp on his land between April and October. This working bee was an opportunity to get things sorted before camping opens at Easter. Team Dunny cleaned the toilet and got the composting toilet barrels sorted for the upcoming season. Sections of overgrown track were trimmed and reflagged. A billion thistles were also killed (still a few more billion to go). Thanks everyone who came along, especially the trackwork team, and Simon and Vicky who delivered the new poo barrels from Hobart. And as always huge thanks to Andy for offering camping to the climbing community in this special place! 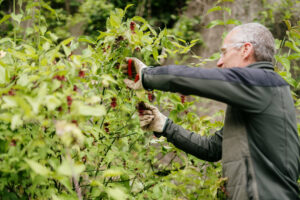