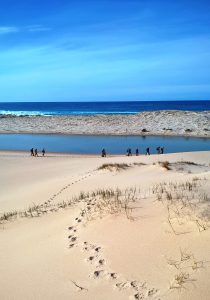 Jewel of Break O’Day, larapuna / Bay of Fires, is cleaner, healthier and more loved after this year’s larapuna Community Weekend.

Over 120 volunteers and PWS staff spent the first Friday and weekend of August walking approximately 50km on the beaches north and south of Eddystone Point, soaking up the larapuna / Bay of Fires landscape and scouring the dunes and beaches for marine litter and ‘sea spurge’, a beach weed.

While the beach litter collected this year may have been a little less by weight than previous years, the number of plastic fragments was up on 2018. Small and minute plastic fragments are deadly for many marine birds and fish. Plastics continue to be the most common type of marine debris found during the larapuna Community Weekend by volunteers and researchers from Adrift Lab at IMAS/UTas. 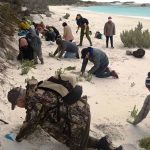 Over the three days 27,000 sea spurge plants were hunted down and 11,000 of them removed by volunteers. Sea spurge is an invasive beach weed originating from the Mediterranean region that has taken over many Tasmanian and southern Australian beaches already and is a threat to beach nesting birds such as the threatened hooded plover and oystercatchers.

Wildcare Friends of larapuna Coast group President Polly Buchhorn said that of 139 sea spurge sites recorded this year 54 are marked as ‘patrol / sea spurge free’, 70 are still ‘being controlled’ and just 15 have ‘uncontrolled’ status and are flagged for follow-up control treatments.
“While we explored and enjoyed the larapuna coast together we weeded more than 5.5 hectares of sea spurge, 6,600 juvenile plants were removed and will not get to flower and produce seed this season and remaining large patches are shrinking”, Polly says.

“After six years of effort by hundreds of volunteers and PWS the area of beaches walked that can now be considered ‘sea spurge free’ increased this year to more than 27ha.

“That is helping to get the east coast sea spurge free, but keeping it that way will need regular patrolling for new seafaring sea spurge seeds that take root and more weeding to get remaining infestations and patches under control, Polly said.

The larapuna Community Weekend is also about bringing people together to learn about enjoy and share the natural and cultural heritage of this coastline. This year about half the participants were new to the event and exploring the larapuna coast.

Now in its sixth year the larapuna Community Weekend is organised by the Parks and Wildlife Service with the Wildcare Friends of larapuna Coast and a host of other partners, such as the Tasmanian Walking Company (who operate the ‘Bay of Fires Walk’ and Lodge), Aboriginal Land Council of Tasmania, Friends of Eddystone Lighthouse, Adrift Lab and Break O’Day Council. With all the fresh air and exercise involved the event is also supported by Healthy Tasmania.

Care is needed when weeding sea spurge as its white sap is toxic and between spring and autumn disturbance of significant species of birds that nest and raise chicks on the beach affects their breeding success and survival.

Beach walkers interested in volunteering to help with a coordinated effort for a Sea Spurge free East Coast while they walk their beach can contact Friends of larapuna Coast (wildcare.larapunacoast@gmail.com or wildcaretas.org.au/branches/larapuna-coast/) and should register with local PWS offices.