Keeping an eye out for OBP’s 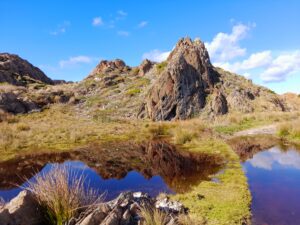 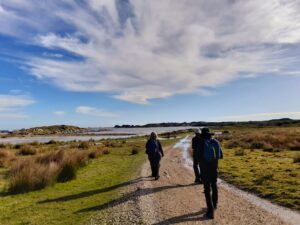 Volunteers on the job by Kym Blechynden

The critically endangered Orange 🍊 Bellied Parrot (Neophema chrysogaster) is one of Australia’s most threatened bird species. Their last known breeding site is at Melaleuca in the Tasmanian Wilderness World Heritage Area. This species is at risk of extinction in the wild.

Wildcare volunteers via Friends of the Orange Bellied Parrot, play a crucial support role with the Department of Natural Resources and Environment Tasmania’s OBP program, conducting on-ground surveys up to six times a year around both Arthur River and Strahan.

A team of seven volunteers spent two days in Arthur River and surrounds, supporting important surveillance work for the Orange Bellied Parrots. In small groups or pairs, volunteers armed with binoculars and cameras went on foot across coastal scrub areas and 4WD tracks. Sightings of seed eating birds, including any OBPs that were seen, were recorded on survey forms and collated for NRE’s Orange-bellied Parrot (OBP) program, along with photographs. 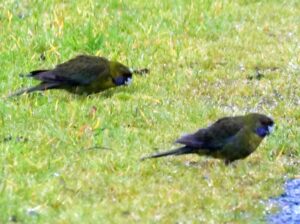 No OBPs were seen, but there were plenty of Green Rosellas by Simmo Van der veen 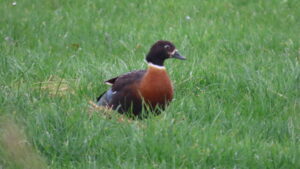 Day two was a good day for ducks by Marianne Gee

The weather was kind on day one of the survey (Saturday), with light winds and a sunny day, enabling the teams to complete seven hours of survey activities across three coastal areas. On Sunday, the weather was more “typical” of Western Tassie, with volunteers donning wet weather gear and/or surveying from the car, including areas around the Studland Bay Wind Farm and Woolnorth (both with permission).

“Being a member of the survey team was a great experience – as a new Wildcare volunteer and Conservation graduate I learnt heaps from the experienced team members. It is so great to see so many people passionate and dedicating their valuable time to support the critically endangered OBP – and the great Wildcare activities in general!”, said Ms Kym Blechynden, new Wildcare volunteer.

“I’d definitely recommend it to other prospective volunteers too in getting involved – you meet some great folks and learn heaps, and get to spend time in beautiful coastal areas like Arthur River – what a great way to spend a weekend”, says Kym.

If you are interested in joining the team for the next survey, 10-11 September at Arthur River and Woolnorth, please see the details on Wildcare’s Event Calendar here and/or contact Marianne at friends.of.the.obp@gmail.com

Find out more about this work here.