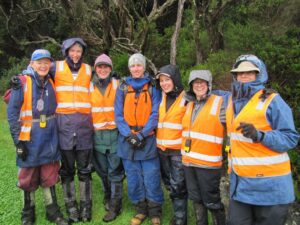 Before I went to Maatsuyker Island I thought of it as one of those magical fairy-tale places.

After going I think of it in exactly the same way.

Located about 10kms off the southern coast of Tasmania – ‘Maat’ is buffeted by the Roaring Forties and home to Australia’s most southern lighthouse. It is part of both the Southwest National Park and World Heritage area.

My introduction was as part of the 2019 weeding team. Initially I was selected as ‘twelfth person’. Very fortunately for me this changed pretty quickly and I was on the team.

Knowing full well what a huge gig it is to manage something like this – I was incredibly impressed at the planning and organising. The big day arrived, concerns about the weather dissipated and the chopper was able to fly. And I – along with 11 others – was on the island.

Without doubt it is one of the most evocative places I have ever been. 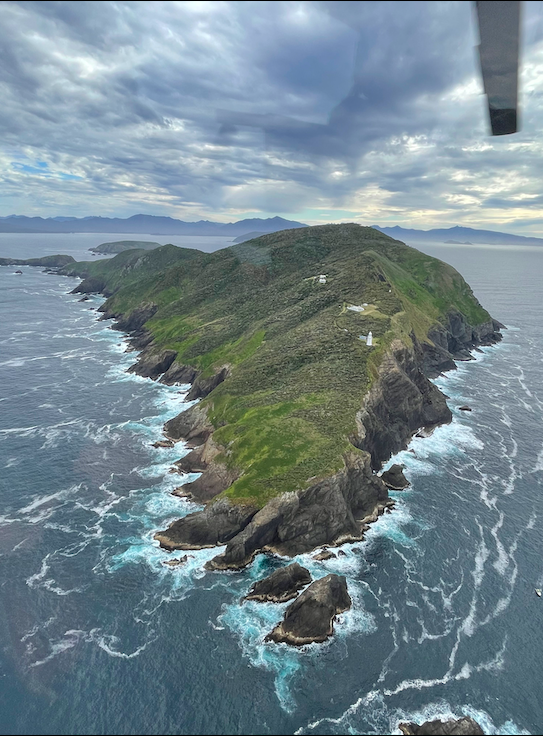 The vegetation shaped by wind and salt is diverse. Banksias, dogwoods, native laurel to name a few. There are the glossiest mountain peppers with the biggest pepper berries you will ever see! The dominant tea tree is twisted into wonderful shapes – I really hope to see it in flower one day.

Weed survey work, weed treatment and monitoring have been performed on a regular basis on Maat since 2004. By my time the big infestations had been eradicated – I heard the stories of swathes of hebes taken out with chainsaws and blackberries smothering everything.

We stepped into our roles as weed detectives – getting our ‘eye in’ to identify the target weeds against the tangle of greenery. And strategically using ‘Fulcrum’ in which the previous year’s density and location of target weeds had been mapped. The data we collect then updates the maps for the next weeding team and so on. The huge reduction in hebe and blackberry is testimony to the huge success of the weeding program, and is of course brilliant! Although I have to say it is quite a thrill when you find one…

Following my trip to Maat – I joined the FoMI Committee, toward the end of 2019.

Weeding is a big deal, but it is only one of the things FoMI does. Obviously vital for ongoing restoration and maintenance of vegetation – weeding is just as critical for seabird habitat values. Monitoring of short-tailed shearwater burrows began on Maat in the 2013/14 season. Today we can see breeding areas previously infested with blackberry and hebe beginning to be re-colonised.

The shearwaters, known too as ‘yolla’ or ‘moonbird’, return each year to the same burrow to raise their single chick. Maatsuyker Island is the third largest breeding colony in Tasmania – and the Maatsuyker Island group supports around 1% of the world’s population.

In 2020/21, short-tailed shearwater burrow occupancy during incubation, measured in December (72%), and breeding success, measured in March (79%), were the highest on Maatsuyker Island since the monitoring program began. 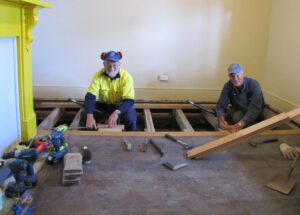 David and Ron working on the floors FebMar2019

There is also the building program – working to conserve all the historic buildings which includes maintenance of the lighthouse. As you can imagine, there is much to cover and it requires a lot of coordination and thinking outside the box to undertake building works in such a remote location. At times it’s really not very different to the days of the lighthouse keepers – earlier this year the tank stand at the whim shed was repaired with ‘resources at hand’, likewise the seat also at the whim shed. Thus the enduring tradition of creative building maintenance on Maat continues, and I think a lovely link between past and present.

All of this is made possible through the wonderful ongoing contributions of the FoMI committee and other FoMI volunteers, our partnership with PWS, the generous support of donors like the Pennicott Foundation and the awarding of grants such as those from Wildcare’s Tasmanian Nature Conservation Fund.

It is a real privilege to contribute to the care of Maat, and the positive outcomes I have witnessed in the short time I have been involved are nothing short of impressive.