Shenanigans on Schouten – we were too busy. Monday December 6th saw the Schouten Shenanigans crew of 7, plus some of FoF’s esteemed older members, gather for a BBQ lunch at Freycinet and a brief FoF meeting (no official AGM this year).  Afterwards the Schouten team gathered for our briefing with Parks (thanks Steve E), finalised gear and still had time for some relaxation followed by an evening meal at the Bistro.

Tuesday we woke to an overcast, slightly wet day.  Our water taxi wasn’t leaving until 12:30 so it was a relaxing morning.  It was a choppy ride over but once on the island the afternoon was filled with camp activities – brush cutting, volunteer camp established, caretaker gear unpacked and set up. Our group of 7 crack weeders were now ready for the real work – removing gorse from the island.  A normal day saw us heading out at 8:30 to the ‘paddock’ armed with our tools, wearing insect repellent soaked overalls, gaiters and carrying our day bags.  We finished normally between 3-3:30pm so that there was still some time for leisure, with a rest day had midway.  For leisure, people swam, snorkelled, walked or just chilled.  Walks included Bear Hill, Mt Story, Sandspit Point and the Waterfall, which was running due to recent rains.

Thanks to Ros, John, Paul, Grace, Chris and Ralph, who along with myself, managed to remove @ 24,300 seedlings and 720 mature plants, a total of over 25,000 plants for the week, a brilliant effort.  Also a big thank you to those people who got into the ‘thicket’ and tackled some large gorse ‘trees’ – it’s not very pleasant work but extremely satisfying when done.

On a beautiful Wednesday morning (15th December), with dolphin being active in the passage, Ralph and I waved the group goodbye.  We were staying on the island until the caretakers arrived on the 24th.  This gave us time to spray the blue periwinkle, which has become a concerning weed on the island covering a largish area within the ‘paddock’ and remove another 4,500 gorse plants.  Don’t worry we still had plenty of time to swim, walk and relax, especially as we had the island to ourselves.

Special thanks to Nathan, Sue and the team from Freycinet Adventures for their donation of the Aqua Taxi to and from the island for the group – this is always much appreciated.  Also, thanks to all the Freycinet Parks staff who look after our group so well.

The next Schouten Shenanigans will be held 5-14 December 2022.  Expressions of interest will be asked for from the beginning of September 2022.

setting up the caretakers tent

returning to the hut along Morey’s beach 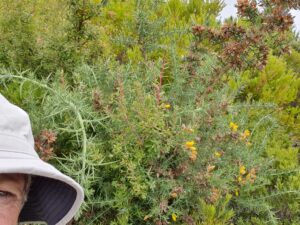 in the thicket_selfie with a gorse bush

a view to the peninsula from the ‘paddock’ 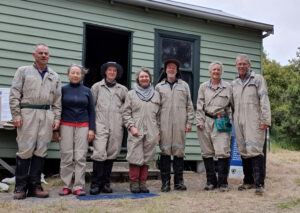 a group of ace weeders