December 2020 saw 8 intrepid members of Friends of Freycinet head to Schouten Island for their annual working bee to tackle the removal of gorse and periwinkle on the island.

Volunteers fully support themselves on the island for a period of 7 days and spend their time weeding gorse in the known areas as well as patrolling the island looking for infestations that have been previously unknown. While on the island we also check coastal areas for sea spurge and remove rubbish.

The removal of gorse/periwinkle has been an ongoing program for over 20 years, and in areas that were originally heavily infested we now see the native vegetation returning. With raining falling nicely on the east coast throughout 2020 we did see a huge increase in the number of gorse seedlings appearing in the known areas with vollies removing @ 25,000 seedlings this working bee. We are still discovering large mature plants on the island, but these numbers are decreasing. The long-term outcome for this project is hopefully the eradication of gorse and other weeds from Schouten Island.

It did take a couple of trips to get volunteers and gear to the island so a huge thank you to Nathan and Susan and their team at Freycinet Adventures for their donation and time in providing transport and the Tasmanian Nature Conservation Fund for their assistance. 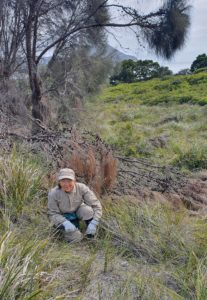 Removal of gorse in all sorts of places.