December 2022 saw an intrepid group of ten Friends of Freycinet head to Schouten Island to tackle the gorse for another year.

Due to an unfavourable weather forecast we delayed our departure by a day and instead the group met at the PWS workshop on the afternoon of Tuesday 6th. After our briefing and finalising our working bee gear, we were ready for departure to the island the next morning. After setting up out tents it was a short stroll to the Lodge bistro for a meal and getting to know each other.

Wednesday morning saw the group travel by Aqua Taxi to the island. Thank you Nathan and Sue for this kind donation.  Caretaker gear and working bee implements were transported to the island by the PWS boat. The first task once on the island is to transfer all the equipment and bags off the beach to Morey’s Hut. Once the long grass around the hut was taken care of, camp could be established. Caretaker equipment was then set up and the first challenge of the week was completed, ie setting up the caretaker tents. 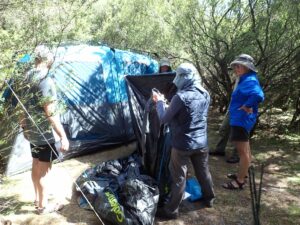 The next six days were then quite challenging finding and removing gorse in vegetation that has grown considerably  over the past couple of years. Recent heavy downfalls also left the ground sodden in many areas. On the upside it did make pulling gorse seedlings a lot easier.

Another problem plant on the island is Blue Periwinkle (Vinca major), which now covers a rather large area. For a couple of us this meant a day of spraying to try and contain it.

Overall, the weather for the week was relatively good to us with the rain falling mostly overnight and the days not too warm. Weeding for the day would finish at around 3pm and the more energetic souls would then head off for a walk or a swim.

The week passed quickly, and we were soon packing up to return to Coles Bay and welcoming the first caretaker to the island early on the 14th. That afternoon a tired, but satisfied group, was collected by the Aqua Taxi. For an encore we got to spend some time with a small pod of dolphins as they played in the boat’s wake enroute to the Coles Bay jetty, thanks again Nathan.

A huge thank you to Ros & John, Peter, Ross, Marilyn, Catherine, Ralph, Malcolm & Trish for their hard work and support over the week.