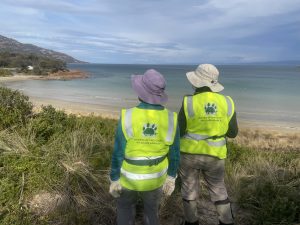 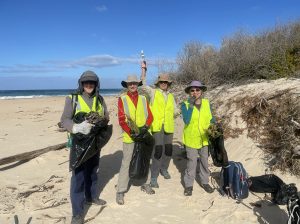 Volunteers:
Dave, Ian, Joan, Greg, Roz, Debra, Peter Jenny, Tanya, John (Monday to Wednesday) and Ros.
Thanks to thorough organisation by Fee (Parks Ranger) and Jenny (FoF coordinator) prior to the week, and luck with the weather, we had a very smooth-running, enjoyable, and productive week.

After safety and planning briefings led by Fee on Monday morning (not to mention provision of some delicious cake for morning tea, by Fee and Roz, thank you!), the group split into 3 and generally remained working in these 3 subgroups for the rest of the week.

Monday 16th
Group 1 (Dave, Joan, Ian, and Greg) set off with Shannon (Parks staff) to the YHA hostel at the Fisheries on Monday afternoon where most external walls were painted, and sand raked and levelled beneath the building.
Group 2 (Roz, Peter, Debra) led by Steve (‘Wolfie’, Parks Staff) spent Monday afternoon weeding thistles and gorse at Point Meredith followed by weeding at Swanwick Quarry for slender cottonseed and blue butterfly bush.
Group 3 (Tanya, Jenny, John, and Ros) travelled with Fee, to Bagot Point at Dolphins Sands to survey the weed situation at this location, however, were hindered from completing the task by a higher than usual tide. Following this, the group removed some thistles at the end of River and Rocks Road, on return to Coles Bay. 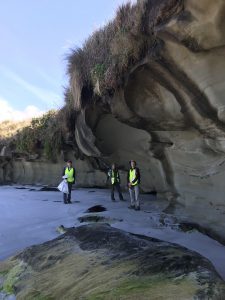 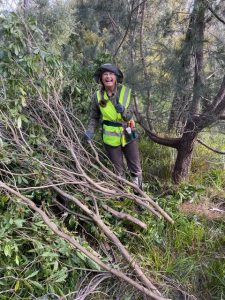 Tuesday 17th
Group 1 completed most of the first and second coats on YHA walls. The afternoon was spent weeding sweet pittosporum from the overflow car park area across the bush and the swampy area, following the tapes marking the new track to be constructed to link with the track from the beach up to the shops. The track was followed as far as the toilets near the boat ramp, weeding on both sides and finding a lot. Two large mirror bushes which had been earmarked for some time, were also removed from near the boat shed.
Group 2 weeded on Whaler’s Lookout Reserve removing sweet pittosporum and boneseed then moved to Lookout Rock Reserve for more weeding of boneseed and sweet pittosporum.
Group 3 commenced the annual sea spurge survey and removal walk, starting at Lagoons and reaching Picaninny Point by the end of the day and removing over 400 sea spurge weeds at around a dozen sites.

Wednesday 18th
Group 1 worked with Marty (Parks staff) replacing about 40 worn boards from the Cape Tourville boardwalk. Joan cut and trimmed vegetation from along both sides of the boardwalk, a laborious and hard job.
Group 2 continued weeding at Lookout Rock, with more than 3000 pittosporums removed and stillplenty remaining for future working bees.
Group 3 completed another day of sea spurge surveying, with the removal of a mere 4 weeds at just one sitealong the coast between Picaninny Point and Seymour. 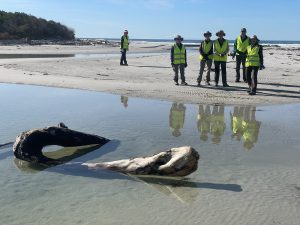 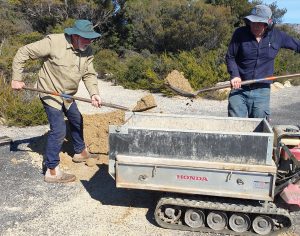 Thursday 19th
Group 1 spread 3 large ute loads of gravel on the gravel section of the Cape Tourville track, shovelling, power barrowing and whacker-packing.
Group 2 A slightly re-arranged group (Tanya, Debra, Roz and Peter) joined the sea spurge survey and removal quest along the coast between Douglas River campsite south to the lagoon behind the Nature Park where a very large number of sea spurge was removed and another large patch of sea spurge noted for removal, on
the other side of the lagoon.
Group 3 completed a third day of sea spurge surveying, walking between Seymour and the Douglas River with 23 sea spurge weeds found scattered along 4 sites on the coast.

Friday 20th
Group 1 with Marty (and supported by Wolfie), completed the gravel replenishment at the Cape Tourville track using a truckload of gravel this time, while Joan gave the top house accommodation a deep clean.
Group 2 and 3 combined to work in between the dunes and the burn site behind the southern end of Muir’s beach, with removal of over 2 dozen bags of rubbish and weeds (predominantly thistles and sweet pittosporum).

Many thanks to Fee and Parks staff for organising and leading an enjoyable week of varied activities for their volunteer friends. 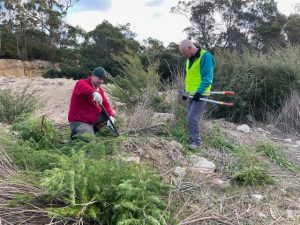