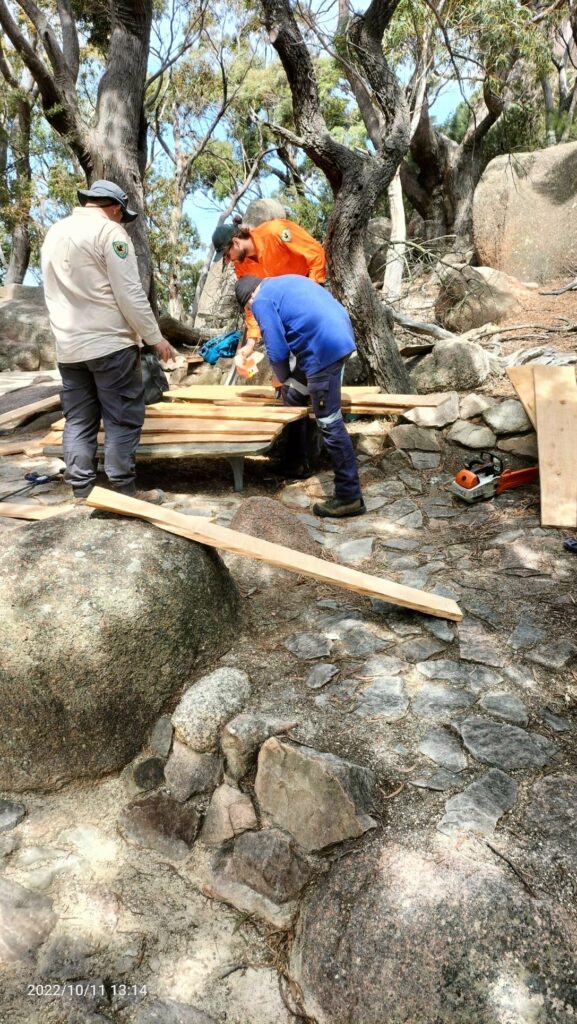 Volunteers (Ian, Joan, Don, Lee, Lorraine, Mal, Rob, Peter, Ross, Ros and John), met at the Parks workshop at 10:30am where we enjoyed a delicious morning tea with Parks staff, provided by Fee and others. Thanks again for the scrumptious GF citrus cake Fee!

Volunteers were then briefed (on safety and working bee plans) by Ranger Fee before we all (with Parks staff Jonathon and Fee) set off to weed an area of land opposite Iluka Caravan Park and behind Muirs beach dunes.

Bagged weeds were carefully taken to the tip.

Group 2 (Parks staff Marty and volunteers Ross, Mal and Rob) – carted new Oyster Bay pine wood slats by motorised wheelbarrow, up to the saddle on the Wineglass Bay track to successfully (with much problem solving) replace rotting slats on ‘the saddle seat’.

Group 3 (Parks staff Max and Fee and volunteers Joan, Peter, Ros and John) cleared and weeded along the new track which connects Coles Bay township to the Parks visitors centre.
This section was cleared of pittosporum (approx. 2000 mostly small and some larger plants) primarily and an extensive area of trumpet vine (approx. 25 rubbish bags full) near the Wineglass Bay Cruises jetty was cleared. 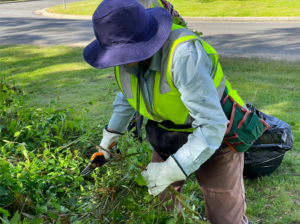 Group 1 – Parks staff Jonathon, with volunteer John accompanying him, conducted the daily tasks around the Coles Bay campgrounds and facilities.

Group 2 – Parks staff Marty and volunteers Mal and Rob worked on repairing the steps at ‘The Whale seat’ on Richardsons beach and then sorted nuts and bolts in the Parks workshop.

Group 3 – Parks staff Fee, Max and Nick ferried volunteers Lee, Don, Peter, Ian, Joan, Ross, Lorraine, John and Ros to River and Rocks campground for rubbish collecting and removing the extensive mat of Cape weed from the periphery of the campsites and tackled some gorse bushes in the area.

Overall, we removed 37 bags of cape weed and rubbish and 5 bags of gorse, which were carefully taken to the tip. All volunteers returned to the workshop just after midday Wednesday for an informal lunch gathering and collection and tidying of the FoF gear to store until the next working bee.

Many thanks as always to Fee, and also to Lorraine and Jenny Baulis (currently overseas) for the organisation of this working bee. Thank you too to Peter for providing volunteer accommodation. 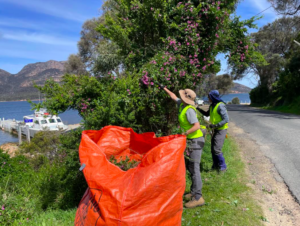 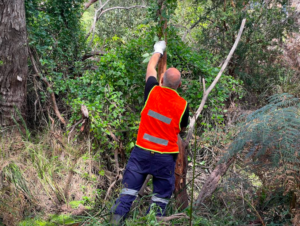