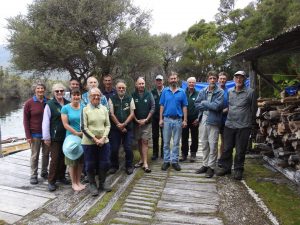 It’s a recipe for a successful working bee! 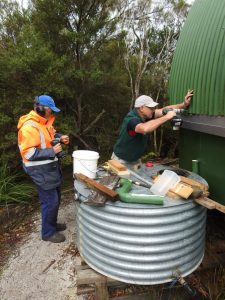 A cheerful and well skilled team at this year’s FoM working bee was not daunted by a little rain. Seven volunteers arrived by light aircraft on Monday 12 March and three arrived on the yacht Juliet, joining Janet and Geoff already there. Ranger Ian Marmion joined the team.

One of the first jobs involved moving 3 or 4 cubic metres of firewood from the campground to Barbara’s house. The wood came from a nasty ‘widow-maker’ of eucalypt limbs, thankfully brought down to earth by a passing arborist in January.
On three of the more or less fine days, Team Claytons headed down Melaleuca Inlet with trusty coxswain Dave Ross to replace rotted exterior cladding, install flashings, apply much needed coats of paint, fix the doorstep and replace a couple of sheets of deteriorated interior lining with new plywood – among other jobs! (See separate story.) 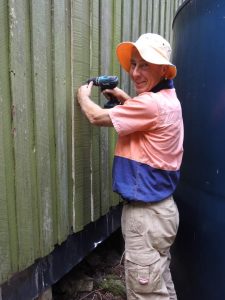 Rob working on the cladding at Clayton’s. Photo – Ian Marmion

The skilled sparkies from yacht Juliet tackled the electrical wiring at Barbara’s, bringing it up to standard. Cabling from the workshop to house was slung on a catenary on poles and encased in conduit. The job was completed with some replacement wiring at the house, a battery isolator switch and distribution fuses.
Chris tackled a repair job on the all important wood stove. Great when this was back in action and cooking. Others painted bondcrete on the exterior brick wall. The Timber cladding on the house is much in need of replacement. That will be a big job for next year! 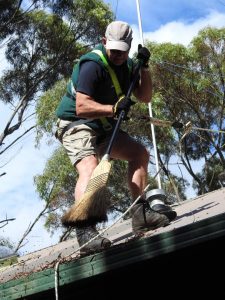 Maintenance at the Rallinga Mine site included re-roofing the dump truck shed with second-hand iron and temporary repairs to the smelter roof. Rob and Leanne have generously donated some roofing iron for a complete replacement next year.
Mark Simpson and Ian Marmion worked on the gutters on the Rangers Quarters. Being so high and slippery this is always a daunting job requiring heights equipment. Mark put in several days brushcutting the firebreaks. That man is a machine! The sedgy vegetation here is no stroll in the grass, being thick buttongrass, cutting grass tussocks, tea-tree and the like.

Caretaker David Milne, with help from Ian and several of our crew, replaced the rusted guttering on the Second bushwalkers hut (LWC hut) and re-plumbed the tanks. The new stainless steel gutters should have a long life in this challenging climate.
Volunteers installed an outdoor wall display on the Deny King Heritage Museum, making the entrance look much more interesting and inviting. 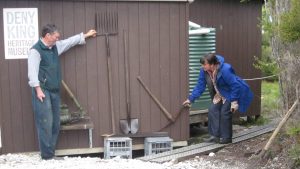 How does this look?  Dave and Mel arranging a display, Museum front wall. Photo – Janet Fenton.

Other jobs included yet more drain-digging and the usual round of fish-oil application to slow the progress of rust (see separate stories). Mark assisted Geoff with continued repairs to the sidewall of the Kings’ house. This phase of the restitution project was at last completed this time. Rob and Leanne made Karina’s cabin their home for the week and while there, oiled some of the cladding and repaired the leaky veranda and woodstore. 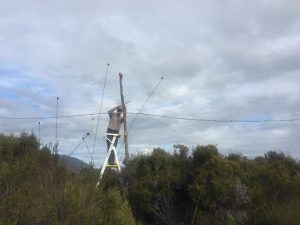 Setting up poles for the catenary. Photo – Andrew Boon.

Volunteers took turns in providing delicious meals either or at Kings’ at Barbara’s . Thank you Barbara for making your place available for the week. Caretakers David and Wendy Milne worked hard and OBP volunteers Craig and Debbie pitched in too. A big thank you to all volunteers for your hard work, input into planning for the future and for your good humour, making the week both productive and lots of fun.

Once again weather called the tune and volunteers were weatherbound for an extra day! 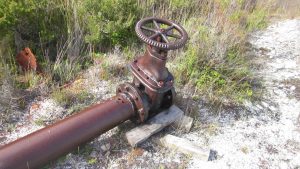