On Sunday 1st August we were treated to a wonderful educational opportunity thanks to the generous offer of Caleb Pedder, a consultant Aboriginal Heritage Officer.

In searching for an Aboriginal Heritage Officer needed to participate in an archaeological survey of the area,  I happened to call Caleb.  He welcomed the chance to discuss  and offered to give our group an information session. This was so fortuitous as we wanted to ensure we were aware of Aboriginal heritage material and sites that may be present. We needed to know how to prevent disturbing sites in the course of our weeding work.

We were all was so amazed at how knowledgeable our presenter was. Caleb Pedder has a huge wealth of knowledge and skill at describing the way his ancestors lived and moved around this area. He has had a lifetime of experience learning about his own ancestors and working as a consultant. His work has included archaeological surveys, relic identification, as an expert witness for legal cases and education. He has given educational talks to many organisations and you can see that he loves doing this. He is a natural teacher. Our group was so enthusiastic and interested that the questions kept flowing. Caleb likewise poured forth his knowledge quite happily long into the afternoon. It could have kept going for another hour there was so much interest. 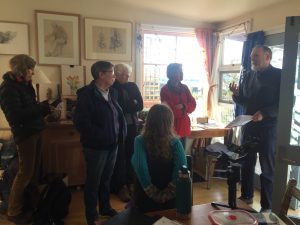 Caleb began by showing us the many tribal nations known to have existed in Tasmania. Our area is believed to have been inhabited by the Oyster Bay tribe, which included the Moo maire mener people. He explained how it was the women and children who mostly spent time at the midden sites. People slept on the middens. They were regular camp sites over perhaps millenia.

He talked about types of Ochres and how they were used not only for ceremonies but for insulation from the cold and traded. He also talked about special rock, Spongelite, found only in the north west, prized for its great qualities for stone tool manufacture. These things were traded great distances within Tasmania, or lutruwita. 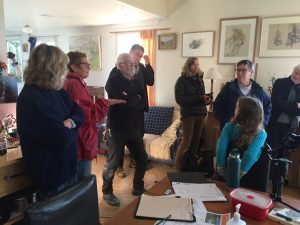 He explained how stone artefacts have a “bulb of percussion” which reflects the force travelling through the stone as a result of impact upon it being made. Stone tools are usually either right handed or left handed, but there are some designed to be ambidextrous.

On the shore below a large midden, Caleb explained how these are generally associated with women who are the ones who jumped into the water and gathered the mud oysters and austrocochlear shells (a small gastropod).  The men would be out the back hunting. The area would have also been regularly burned to make for easier passage by bare feet and bodies. Similarly, hunting would be more effective as new growth would have provided the grazing macropods with plenty of food. Currently, the oldest known midden in the Hobart area is 8000 years old and is under a car park. 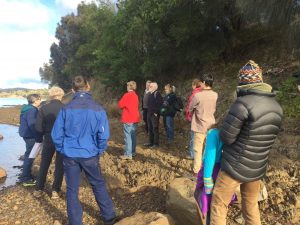 As a Wildcare group we are able to help preserve and protect Aboriginal Heritage by first being aware of the potential presence in the area, second by being respectful of its value and thirdly by knowing what to do if we make an incidental find and by not causing disturbance to the soil.

We can record any incidental find by taking a scaled photograph and sending it to Caleb, the Tasmanian Aboriginal Centre and Aboriginal Heritage Tasmania. 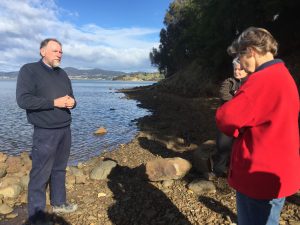 We now feel like we have a mentor we can go to for anything relevant to this subject. He has inspired us to better appreciate the way our indigenous people treated the land, country. That they came from it, they didn’t claim to possess it like we do today, but to BE of it, BE from it and with that understanding to treat it as their source. They respected and respect country, our Earth, and so treated it with care and were the first custodians.

This is what we are wanting to be, to care for our reserves and public land like custodians. And respectfully with the collaboration and advice from the indigenous community.

Aboriginal middens and stone artefacts are protected under the Tasmanian Aboriginal heritage Act 1975, which states that it is an offence to destroy, damage, deface, conceal, remove or otherwise interfere with a relic. If a finding is made report it to Aboriginal Heritage Tasmania (AHT). Use the site recording form from www.aboriginalheritage.tas.gov.au/resources and forward to aboriginal@heritage.tas.gov.au

There was so much learned from this event I have not included all the detail.

Thanks immensely to Caleb Pedder for his generosity of time, knowledge and effort in informing us.