Written by Adrian Blackman, Secretary of the Friends of Wellington Park

The hills are alive with the sound of…petrol-powered hedge trimmers (at least occasionally). When the Friends of Wellington Park are not constructing tracks they are taking care of them. We look after 18 km of tracks, complementing the work done by Hobart and Glenorchy City Councils and the Parks and Wildlife Service. An important maintenance activity involves removing encroaching vegetation from the edges of tracks—a seemingly never ending task. Tasmania’s bush can be quick-growing at elevated altitudes like the slopes and even the tops of mountains in Wellington Park. The area has a rich and diverse flora however a particular problem for bush walkers is Bauera ruboides since it is abundant and quick growing and often forms a tangled mass one to two metres high that can be difficult to walk thorough; it is even worse in wet conditions. 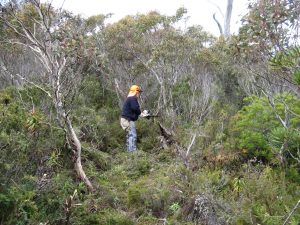 Adrian working with a hedge trimmer

The usual method of removing vegetation that intrudes into the track is by hand using secateurs and loppers (and occasionally folding saws). One advantage of such tools is that they are light and easily carried since often we have to walk to the work site and this can take up to an hour or so (sometimes clipping as we go). A disadvantage is that the work is slow, back-straining and tedious. The Friends of Wellington Park have had an opportunity to use a petrol-powered hedge trimmer and the response has been, in a word, ‘fantastic’. Such machines are reasonably light in weight and can be carried long distances but the major advantage is that they can cut through vegetation with branches up to 2 cm or so very quickly. Bauera thickets present no problem—we can defeat them! (at least temporarily). We often do a bit of follow-up hand trimming after the hedge trimmer but this is quite quick and is for aesthetic reasons to remove unsightly branch stubs. Naturally enough not all encroaching bush can be controlled this way; some of it is simply too thick for the hedge trimmer and hand trimming is still needed. 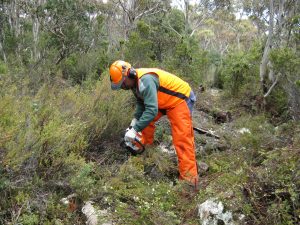 Greg at work with trimmer

In 2017 Wildcare was kind enough to support us so we could purchase a second hedge trimmer and enough of the essential safely equipment to enable us to simultaneously use two such machines (prior to that we used one trimmer and our own privately owned safety equipment and some borrowed from PWS). Working with the Parks and Wildlife Service we have taken on the task of clearing the walking track that is used to walk from Big Bend to Collins Bonnet. This starts at the Big Bend Trail, goes past the Mount Connection summit then joins the East West Trail, in all a distance of 3.6 km. It is now called the Mount Connection Track; previously it was named Collins Bonnet Track. During 2017 we spent three days and now the task is nearly complete. We initially started at the Big Bend end with one hedge-trimmer and made good progress. Somewhat daunted by the task ahead we fortunately obtained the second machine and the pace of clearing improved significantly. We also started trimming from the East West Trail end and we thank the Parks and Wildlife Service for providing 4WD transport to the work site.

Based on our experience to date we estimate that one operator with one hedge trimmer can do at least as much as five people are able to do using hand tools. We also have found that, apart from the two trimmers and two sets of safety equipment, we only need to carry (between the group) one fuel tank together with a few essential tools and that is sufficient to last the working day. 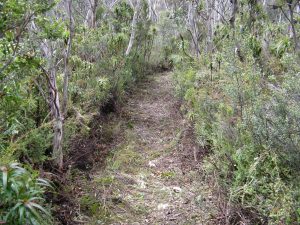 It is certainly true that petrol-powered hedge trimmers are noisy and disturb the tranquillity of the bush (operators use ear muffs). However the overall gain is impressive when one considers how quickly the intruding bush can be controlled. We are impressed and think that two trimmers is the correct number for our group. Our equipment officer takes great care of them and they should give excellent service for many years to come. Thank you Wildcare.