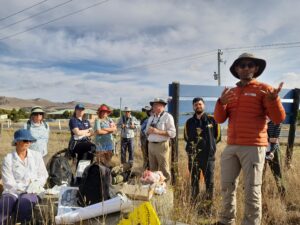 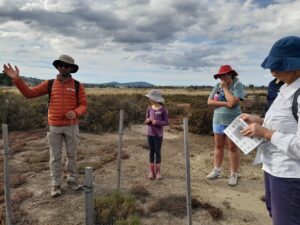 On Sunday April 10th, 2022 we held a Wetland Education event at Orielton Lagoon reserve. We were so fortunate as to have several brilliant presenters give our FoPWOL group a really informative few hours sharing their specialist knowledge of saltmarsh wetlands, birds, fish and the whole ecosystem.

Dr. Vishnu Prahalad from the University of Tasmania (UTAS), our saltmarsh guru, has been working on wetlands for the past 14 years. Here is some of the knowledge he shared with us:

Orielton saltmarsh is one of the driest wetlands in Australia. The driest is in Adelaide. There are no mangroves yet in Tasmania, but given time with climate change there could be.

The impacts to the saltmarsh are many. Almost everything that is not good for wetlands has happened here. A particularly major impact was the Sorell causeway. It was initially built by Inland Fisheries as a dam to stock trout and make it a fishing habitat. In this period there was a loss of wetland species due to the lack of tidal water flow. The area was also subjected to burning.  It soon became a cesspool with foul smelling muds. After community complaint about the smell, culverts were put under the causeway to remedy the problem of anaerobic muds.

In the 1970’s, the wetland was recognised as a conservation reserve by Tas. Parks and Wildlife and changes were made to reverse these impacts. 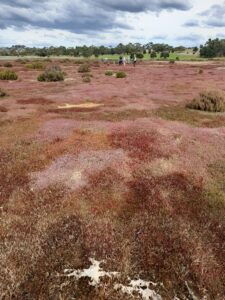 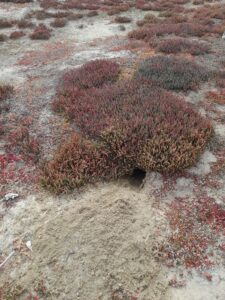 The Pitt Water Reserve is a tide dominated sheltered wetland – part of a system of lagoons and embayments behind an ocean beach, Seven Mile, in Frederick Henry Bay. This means that it is flushed by tides twice a day. Spring tides and neap tides occur monthly – depending on the lunar cycle.  Editor’s note: Spring tides (or King tides) are very high tides (referring to the ‘springing forth of the tide during a new and full moon) while neap tides (which occur seven days after a Spring tide) are low to moderate tides that occur when the sun and moon are at right angles to each other.

If left to itself the vegetation would regenerate, but this has been stymied by sheep and rabbit grazing. Cats also have been caught on camera in this area and are not good for the birds.

There are a lot of edible plants on the saltmarsh, which makes it appealing for grazing animals. Abel Tasman, in his exploration of Tasmania, said of the wetlands at Marion Bay; “there are vast amounts of herbs that are edible here”.

While other wetlands support pademelons, occasional wallaby, devils and wombats, there are relatively few native herbivores at Pitt Water Orielton Lagoon. This is due to the clearing of native vegetation in the surrounding land. There is a real need to create a buffering reserve to provide safe habitat for the native animals.

As well as plants there are lots of crabs, insects and snails. Crabs and snails require good water quality. The crabs reproduce during the Springtide and put lots of larvae into the wetlands. These larvae support the juvenile fish, which feed the larger fish.

The insects are fed upon by the perching birds, the chats and even the Native Hens.

As well as monitoring the vegetation and bird numbers, the University of Tasmania has been documenting the soils to monitor climate change effects. The wetland soils are called ‘Blue Carbon’ and are important for sequestering carbon from the atmosphere. This has been recognised by the Federal government who provide funding for working on understanding and restoring wetland soils. 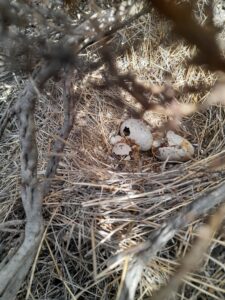 Nest under Tectacornia shrub on Saltmarsh 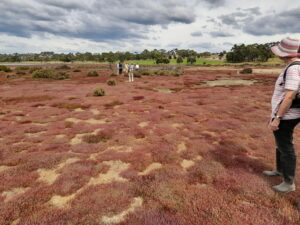 There is great scope here for citizen science if you know your plants, or birds or insects, with an app that UTAS has developed called Saltmarsh Matters App or by logging records into iNaturalist. There is also a great little handbook written by Vishnu, ‘A guide to the plants of Tasmanian Saltmarsh Wetlands’.

Kate Ward from Ozfish talked about the role wetlands play in supporting the habitat and population of fish species. Tiny juvenile fish use the saltmarsh vegetation structures as habitat to hide from larger fish and other predators. The saltmarsh shelters these juveniles from strong currents and provides food from plankton e.g. crab larvae. Vishnu has found through surveys that there are about 25 species of fish including 1 seahorse in Tasmanian saltmarshes which have the highest density of fish recorded in any Australian wetland. Saltmarshes help trap sediments and pollutants thus preventing them escaping into the sea. This keeps the water clearer and allows enough light for seagrasses to grow.

Ash from Conservation Volunteers talked about the work she has been involved in recently in the wetlands of the Derwent River estuary and called upon our members to look into participating in any educative field days they will be running.

Dr. Eric Woehler, the convenor of Birdlife Tasmania and bird guru, spoke further to us about the history of the wetland treaty marking this as a remarkable wetland of international significance. Here is some of what he said:

“In 1971 in Ramsar, a city in Iran, the international wetlands treaty was signed. Pitt Water – Orielton Lagoon was named as one of 10 wetlands in Australia of international significance. This area is on the southernmost end of the East Asian- Australasian Flyway, the flight path of 5 million shorebirds. This flight path begins in Siberia and Alaska and includes China, Korea, Japan, New Zealand and to South-eastern Australia. The birds migrate from their homelands in their winter to spend summer months here to breed and feed. Winter and summer monitoring to count numbers of juvenile birds has shown this place is also a highly significant habitat of resident birds.

There have been coordinated bird counts for the past 50 years, which is the longest period of recorded shorebird count for anywhere in Australia. This wetland is not in good shape. There are significant threats to the migratory and resident shorebirds which have seen numbers decline radically.’

We learned that the threats to the wetland include:

What can be done?

Collette has kindly responded about her experience of the Wetlands Education Day.

“My experience from the PWOL Wetlands Day was that it was made very clear how significant the wetlands are there in the Pitt Water Lagoon and how important it has been to be monitoring the health of migratory bird species and their populations. It was made very clear how important it was to have these wetlands protected from human influences and effects so that the migratory birds and also the local birds, plants and other life that depend on the wetlands can have their survival ensured and endeavour to have healthy populations for the future.

It was also apparently clear that educating people and younger generations of children will also help protect these wetlands and their inhabitants – birdlife and plants dependent on the saltmarshes.”

It was a thoroughly informative day and everyone was very interested and appreciative of this event. It was a marvellous opportunity to gain some understanding of saltmarshes, to appreciate what a treasure we have here and also gain an understanding of the poor state they are in. We are motivated to do something to help restore places like this.