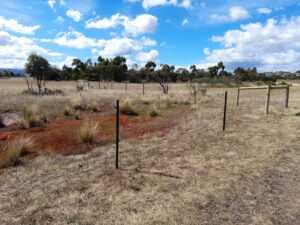 Penna Beach has had a significant make-over, bringing it back to the place of beauty and tranquility it once was. Collaboration between Sorell Council and Wildcare Friends of Pitt Water Orielton Lagoon has resulted in the successful implementation of restoration works through a grant from the Tasmanian Nature
Conservation Fund (TNCF). This project enabled us to extend the work carried out through a previous TNCF grant.

Following discussions between Mandy MacLeod, Sorell Council, Kim Willing our Wildcare Volunteer Services Manager and myself, as co-ordinator of WFPWOL, a number of protective measures were proposed which involved working with Taswater and the Dept. of Natural Resources and Environment. 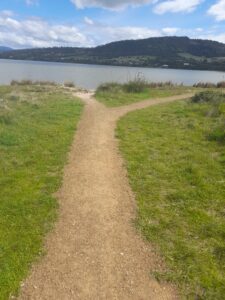 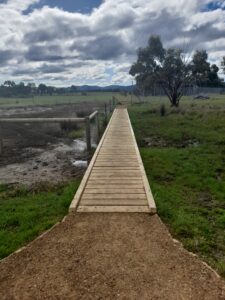 The two wetland areas behind the beach were fenced with ring-lock to prevent further degradation from foot traffic by pedestrians and pets. With time it is expected that the wetlands vegetation will be restored to a natural density, height and diversity. A rare saltmarsh plant, Wilsonia humilis once existed here and hopefully will return – likewise, the rare Chequered Blue Butterfly, Theclinestes serpentata. The fencing is also a mitigation measure to protect small nesting and foraging wildlife, such as red capped plovers and native hens, from disturbance by roaming dogs. The fencing is pretty effective, visually non-intrusive and will allow vegetation to recover.

The access track from Penna Road down to the beach has been upgraded and formalised with a new gravel surface and boulders at the road entrance. Boulders have also been placed at the Penna Road entrance to prevent vehicular access. These restorations have vastly improved the aesthetics of the popular walking access tracks at both ends of the beach.

A new duckboard path was installed between the Taswater boundary at the southern end of the wetlands, where foot traffic had caused erosion. This looks really neat now and is far more pleasant for walkers.

Two interpretive panels have been installed on lectern stands near the first bridge, at the northern end. The intent of the signs is to provide information to deepen understanding of the natural and cultural values of the area by visitors passing through. The information – mostly photographs and drawings, were compiled by myself on behalf of WFPWOL group and edited in collaboration with Mandy MacLeod, Eric Woehler (Birds Tasmania) and Kim Willing. Aboriginal heritage information was gathered in conference with Jude MacDonald, Pardarrama Pungenna Aboriginal Corporation and from Caleb Pedder, Aboriginal Heritage Officer. 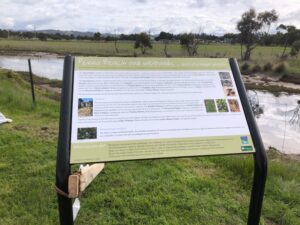 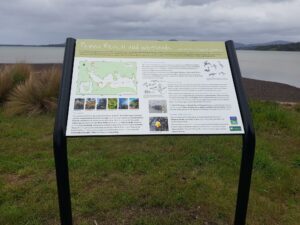 The benefits of the restoration project have been enormous. The fencing is proving to protect sensitive wetlands, allowing them to revegetate naturally. Users of the area have been made more aware of the natural values by seeing the protective measures in place. The fencing, formalised paths and bridges have helped to encourage more responsible use of the area with people taking better control of their pets. These measures have had a huge effect on preventing further erosion and compaction of the lagoon outlets, dune and wetlands.

The gravelled surface of the tracks has improved the experience and enhanced the aesthetics. The signs are well placed, do not obstruct the views, and are beautifully manufactured.

Locals and the wider community have an improved experience in walking through Penna Beach and will become more aware of it being part of the bigger picture of the Pitt Water wetlands. This is a significant improvement in the nature conservation of the Pitt Water wetlands. It is also a major success story of collaboration between Sorell Council and Wildcare. Both community and environment are very grateful!