In early December we gathered to conclude our Fennel weeding campaign for 2020 around the shore of Penna Beach. Our wonderful people cut and pasted piles of Fennel and Briar Rose along the fence line between the road and the TasWater land. 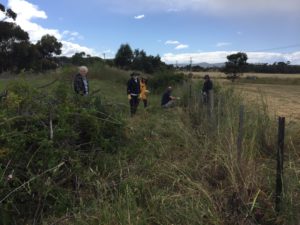 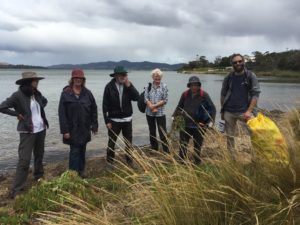 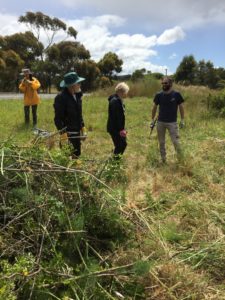 In late February we returned to the Penna shores to continue a follow up treatment to the Fennel, Briar Rose and Boxthorn that had resurrected. Hard working Shirley continued with gusto and steady determination to cut all the prickly weeds long after the rest of us went to inspect the next project, tyres in the next cove. 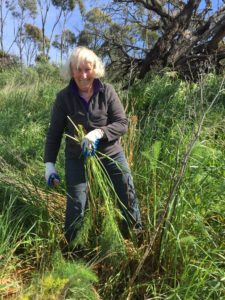 In the preceding 3 weekends I had re-cut and pasted much of the zone of Fennel and Briar Rose at the most western end of the beach. Unfortunately the first treatment was too weak for such massive plants with big tap roots and an ability to sprout all over the root mass. This stand was the biggest and most established in the bay.

Thanks so much to the help of Mona and Dave later that day we gathered up those cut weeds for the council to collect.

Recently our enthusiastic group gathered to haul up 44 tyres from the shore below. Thanks to Matt Baker and his family the tyres had been extracted from the mud flats 18 months ago. With much effort, including crow-barring out of the suction of the mud, the family had then stacked these 40 odd tyres, and at least 4 heavy whole wheels at the back of the cove close under the steep bank. 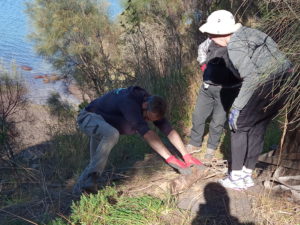 Last week we chain ganged a bulk of tyres up the bank. The heavier remainder we hauled up using a pulley and ropes kindly loaned by my very practical, engineering- minded brother, Paul. It was such a wonderful feat of cooperation and team work! I think everyone felt immense satisfaction that we had cleared the shore of that unsightly rubbish. We spent the next hour and half picking up bottles, cans, general corruption from out of the bushes and road edge around to the first round about back along Penna Road. 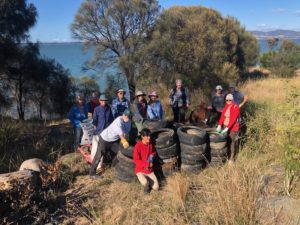 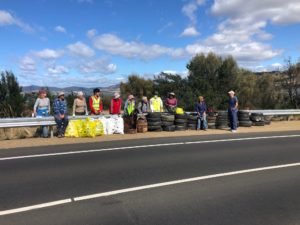 We followed up with a delightful late morning tea of Mona’s delicious carrot cake, Anzac biscuits and tea and coffee thanks to wonderful Mona and David at their exquisite home in Penna! Very rewarding!