The project was made possible through the generosity of donors to the Wildcare Tasmanian Nature Conservation Fund, Wildtracks Cause  and the interest, passion and work put into the Twisted Lakes Track by the Wildcare Cradle Mountain Volunteers since 2017.

The Twisted Lakes Track is a 2.5km long, rugged, and steep high-altitude track (~1050m asl) that is highly valued by bushwalkers for its wilderness character, stunning endemic flora and rugged lakes and tarns. The surface of the track had become increasingly degraded over time due to poor drainage, erosion and track braiding with walkers trying to avoid the mud. Sensitive endemic vegetation had also been damaged as walkers used branches as handholds, and some areas with split-trunk or cordwood trackwork had degraded to the point of creating a hazard for walkers. 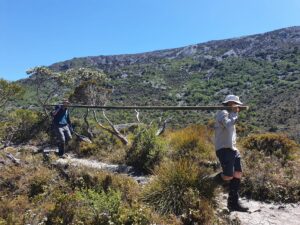 Following initial inspection to identify priority sections for upgrade, required materials were purchased and a contractor was engaged to install new double plank boardwalk over the degraded and eroded sections of track. After materials were packed and flown to the designated drop-points by helicopter, the builder commenced work with assistance from Wildcare Cradle Mountain volunteers (transporting materials by hand, stapling galvanized chicken wire on the boardwalk surface for grip and assisting with some track building). Works were fully completed on the 2/02/2022, with excess rubbish being removed from site by helicopter on 15/02/2022. 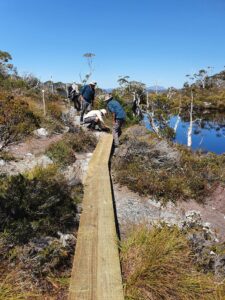 Volunteers preparing the next section of track – Photo by Sally Simco 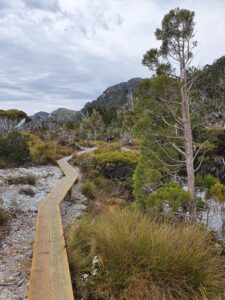 The track builder was the primary contributor to the project however planning, logistics and assistance was rendered by Parks and Wildlife staff who assisted with initial planning and budgeting, helicopter operations to transport materials and tools to site and on ground relocation of materials (timber and tools) to where it was required along the track (estimation of 39 hours). Additionally, nine Wildcare Cradle Mountain Volunteers assisted across 3 days to prepare the site by pruning, relocating materials to different section of work, helping with track building, stapling chicken wire to the completed boardwalk for grip on wet days and collecting and packaging waste/left over material into bulk bags to fly off-site by helicopter (estimation of 184 hours). 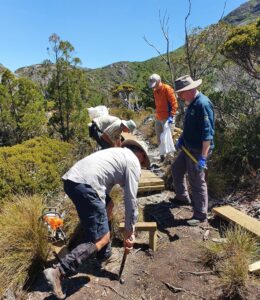 Working on the track – Photo by Sally Simco

The newly constructed boardwalk has achieved a number of important outcomes on the Twisted Lakes Track including encouraging walkers to stay on the formalised track which has stopped active erosion along the track corridor and will prevent future erosion. The environmental benefit of this will be reducing the impact of walkers on the fragile sub-alpine environment and allowing degraded areas to recover. Additionally, the track improvement will limit the number of visitor incidents caused by slips/trips on the degraded track, whilst still aligning with the current track classification and maintaining the aesthetics of the area. The project has therefore successfully reduced the hazards and environmental damage presented by the previous track whilst still maintaining its unique wilderness character. 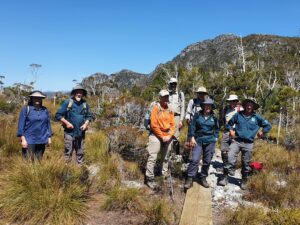 The biggest challenge was working around weather in the Cradle Mountain area with both helicopter operations and track work hindered by poor weather at times. Given a large section of track was to be upgraded, loads were spread evenly along the track however the sole track builder required assistance to carry materials to the exact location where they were required. Additionally, his tools needed to be constantly moved as he moved along the track. This process went better than expected with the help of the 9 volunteers who enabled the materials to be moved more quickly than they would have with one or two people. The challenge was to improve the quality of the track surface without changing the track classification or the natural aesthetic of the track, which has been achieved. 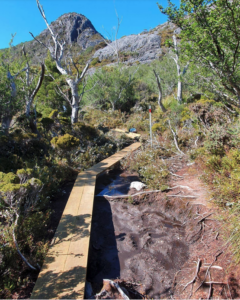 The above picture shows where track braiding had been occurring due to walkers trying to avoid the wet areas (right of picture) the new hardened surface (boardwalk pictured) will enable and encourage walkers to stay off the vegetation to avoid waterlogged areas and allow the damaged environment to recover, additionally minimising future erosion.

Since 2017, Wildcare Cradle Mountain Volunteers have been involved in an ongoing program of works on the Twisted Lakes Track as part of the “Adopt-a-Track” project, aka “the Wild and Twisted project” that has included track pruning and snow pole installation. The team has also assisted with the hardening of the track through prepping the site for construction, assisting with building, installing chicken wire grip, and ferrying materials to site. 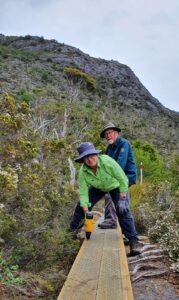