The “WILD and Twisted” Snow pole Project was an initiative carried out by Wildcare Cradle Mountain Volunteers (WCMV) over 2 years (2018, 2019) as part of their adopt-a-track programme at Cradle Mountain-Lake St Clair National Park. 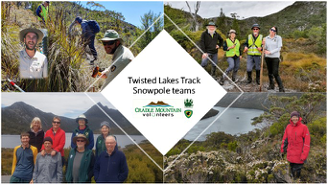 The aim of the project was to install a set of snow poles along the Twisted Lakes track to protect the sensitive alpine environment and promote visitor safety by directing walkers to the designated track which had become difficult to follow due to limited track markers.

The Twisted Lakes Track which is 2 ½ km in length, turns off from the high level Cradle Mountain Circuit at the base of Hansons Peak, passing Lake Hanson and the Twisted Lakes before returning to the main track on the plateau, near the Rangers Hut. 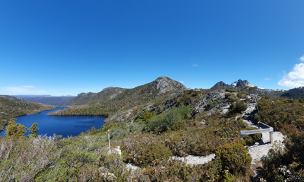 Small grant funding from Wildcare enabled WCMV to purchase 100 fibreglass reinforced plastic poles and steel rods which were prepared with reflective tape and packaged for transport by helicopter to both ends of the track.

Preparation of poles with high vis tape, capping and safe packaging for heli-lift.

The 300kg of equipment was thankfully heli-lifted by Tasmanian Park and Wildlife Service to each end of the track!

In November 2018, following the initial walk up and over Hansons Peak, the first team of volunteers manoeuvred the 10kg bundles of steel rods and 1.5m long snowpoles along the rough and windy track working down-hill from the Rangers Hut.

It turned out though that the track had more twists and turns than first thought and 50 snowpoles only covered half the distance.

Thanks to another successful round of Wildcare funding, WCMV purchased 50 more snow poles and completed the job with help from Parks and Wildlife staff in November 2019.

The old snow poles on the Twisted Lakes track had been cut from King Billy Pine sourced from fallen logs left lying in the Waldheim forest. This practice had ceased by the 1990s when King Billy Pine became a protected timber. The old King Billy poles were repositioned back on the track or given a bit of a tap to make sure they will remain standing for posterity.

Walkers visiting Cradle Mountain National Park will occasionally come across different versions of old snow poles which have intentionally been left standing alongside the new version as testament to the Park heritage.

“The circular marker on the left is the one from the 1960s and 70s which the rangers made from old baked bean cans. I remember Head Ranger Joseph Oetterli collecting cans to make these and painting them half red, half blue. They also painted up whole cans and slipped them over the end of posts. All of the tracks were marked this way. They must have used hundreds of cans over the years. Done through necessity not for environmental reasons.”

Despite the present day emphasis on the sustainable use of materials, the Wildcare Cradle Mountain Volunteer members are appreciative of the Wildcare funding which enabled the purchase of the new PWS preferred high-visibility snow poles (and that our members did not have to collect and paint tin cans)!

Aerial photographer and pilot Gary captured this stunning shot of a snow-covered Twisted Lakes area and even though the snow poles aren’t visible from the air, the Cradle Mountain Volunteers are pleased to know that any adventurous walkers who had been out enjoying the spectacular snowy conditions would have been kept safely on-track. 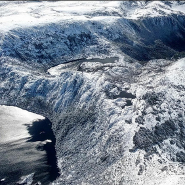 Regular inspection and maintenance of the snow poles, and vegetation pruning of the Twisted Lakes Track will be included on the future WCMV work program.