I’m Working in Sunshine (Wow!) and Don’t it Feel Good

I’m Working in Sunshine (Wow!) and Don’t it Feel Good*

The annual spring volunteering program at Cradle Valley traditionally delivers a wide range of interesting weather conditions to be either enjoyed or confronted by participants. Last year’s was particularly challenging with the first week being cancelled due to storm activity and the second week being only marginally better. Not so this year, the sun gods smiled on us, delivering brilliant weather for the whole 14 Spring days of the program (on the last day the rain bucketed down but that was the first day of Summer so doesn’t count). Consequently, our merry band of workers were literally all over the Valley and were very productive. Here’s what they got up to. 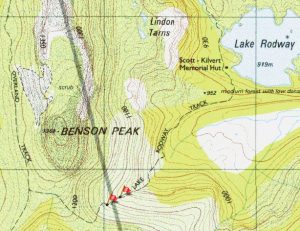 Section of Lake Rodway Track still to be pruned

Two groups spent three days each based at Scott-Kilvert Hut, cutting back the overgrowth on the Lake Rodway Track between the Hut and the Overland Track. All complete apart from a 110 m section shown between the flags on the map. Two other groups did a similar job on the Twisted Lakes Track. Another group did some maintenance pruning on the Lake Wilks and Face Tracks. We’ve become so skilled in this work that we were even called upon to take a day out to coach a group from the Tullah Progress Association who are keen to maintain the Mt Farrell Track to a suitable standard to allow it to be listed as a PWS Short Walk. All of this work significantly improves the experience for walkers and often redirects them to previously hidden, hardened surfaces.

One of the Rodway Track workers, Dav, has produced some YouTube videos that document his experience as a Wildcare volunteer (these generate a very small income stream, which he is fully donating to the Westpac Rescue Helicopter Service).

A Splash of Colour

The paint brushes were out in force with work being done on the Waldheim Day Shelter, Dove Lake toilets, stairs at Pencil Pine Falls, Mt Kate House and Rangers Hut (emergency shelter) near Little Horn.

Over each of the three weeks many young trees were planted as part of the revegetation of the Cradle airstrip project.

A Beacon in the Snow

The erection of snow poles on the Dove Canyon Track was commenced last November. Over the three weeks we essentially completed this task – there remains a gap requiring about five more poles to fill it. 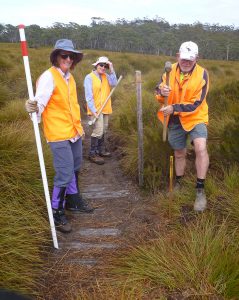 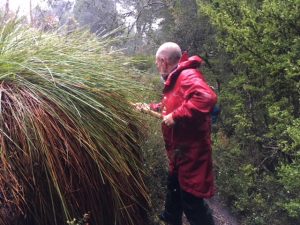 Don’t Get Lost at Pencil Pine 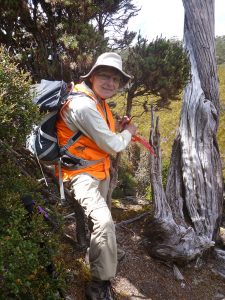 The Pencil Pine Track, which starts from behind Cradle Mountain Lodge, seems to have developed a bit of a reputation for being difficult to follow in places, particularly where it takes sharp turns in the forest. One group spent the best part of a day re-taping it and also re-routing it in areas of large tree falls. The track is now one of the best bushwalker-standard (Grade 4) half-day walks in the Valley. 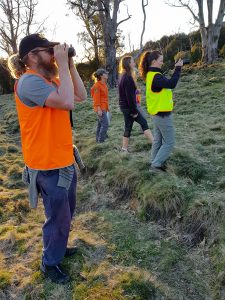 With a definite absence of whales at Cradle, this is probably the next best thing. Our branch has been involved with the wombat counting, health rating and burrow mapping project for the last 12 months. 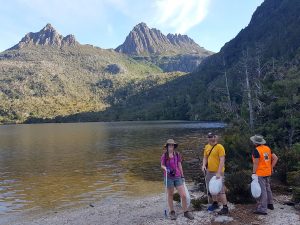 The Dove Lake Circuit seems to receive more than its fair share of litter. Our rubbish collection run this time showed a pleasing reduction compared to that in May. Paper tissues were of course well represented but there were only a few plastic bottles and assorted other items.

A Dwelling for Sun Worshippers 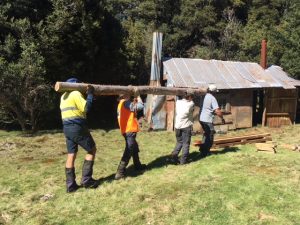 The Sunshine (Yackandandah) Hut in the Vale of Belvoir is to be restored. One group assisted by transporting some building materials to the site.

Well that’s it. A pretty impressive list of achievements. Many thanks to all those who took part. You’ve made a significant difference. Thanks also to Ranger Taylor for organising us and finally thanks to you, Valley of Sunshine, for just being there. 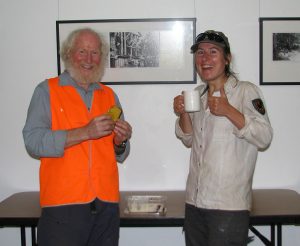 I used to think maybe you loved me, now I know that it’s true
And I don’t want to spend my whole life, just waiting for you
Now I don’t want you back for the weekend
Not back for a day, no no no
I said Sunny Valley I just want you back
And I want you to stay*

* With apologies to Katrina and the Waves