The Penny Project: How Do We Protect Our Estuary Paperbark Woodlands From Coastal Erosion? 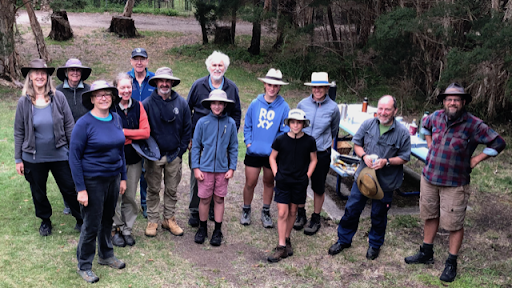 Last July, down at Sisters Beach estuary, our President Lynn discovered that about 40 of the plants and tree guards we had put in at the Paperbark Woodland over the past two years, had been washed out and carried uphill, by the high level sea surge the previous night. Some community groups might think of this as a major setback, but to be honest, we were sort of expecting something like it to happen.

For the previous couple of years, our Wildcare group had been planning and taking action, to find out how best to protect our local estuarine woodland from the increasing effects of sea storms that occasionally sweep into our beautiful local beach. We had noticed that these storm surges have been undermining our beloved sand dunes, and next door to this, causing our elegant paperbarks to fall into the estuary. Unlike the sand dunes, the erosion of the paperbark woodland is a lot slower. For a start, the woodland is growing on consolidated peat soil, rather than unstable sand, and the roots of the mature paperbark trees help to hold this peaty soil together. 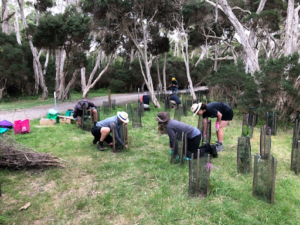 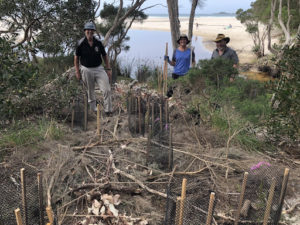 So, as a community group, we decided to start with the erosion and thinning of the woodland, which seemed a relatively easier problem for our volunteers to tackle first. And our local Waratah-Wynyard Council kicked in by putting up the fence protecting our site, and providing funding for plants and tree guards. 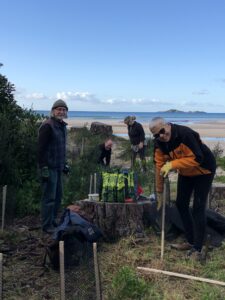 The formation of our group, just over two years ago, had been jump started by a tragic event. In late 2019, one of our residents, Dr Penny Whetton, unexpectedly died. Penny was one of Australia’s top climate scientists, a lead author of the Intergovernmental Panel on Climate Change (IPCC).and until just before her retirement, had headed up CSIRO’s climate projections work. Penny loved Sisters Beach and was deeply concerned about sea level rise and the erosion of our local beach and estuary and what our community might do about this. So in her memory, her wife Janet asked for people to donate to a fund to help support community action at Sisters Beach. This, and enthusiasm on the part of a lot of locals for doing something at the estuary, was what prompted the formation of Sisters Beach Wildcare. Vale Penny.

While the knocking down of a proportion of the paperbark seedlings we had painstakingly put in, as a result of the July 2021 sea surge, was a bit of a blow, it was also a great opportunity for us to look at how sea surge events might be limiting the establishment and growth of new paperbarks at the site – something we had noticed as the mature trees at the estuary have become progressively older, without replacement of new plants in some parts.

What we figured out from the storm event, was that it was unlikely that the waves themselves were knocking down the young plants. It’s more what the high waves bring with them – debris from the sea: grass and sticks and small logs and branches. And we saw pretty clearly that the movement of the debris carried by waves in these storm events rip into parts of the site. As waves surge back and forward in some places, with debris at their edge, they bulldoze tongues of destruction, into where we have been re-vegetating. 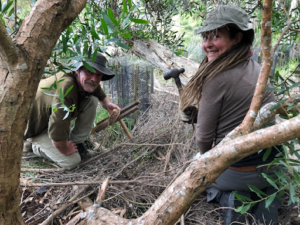 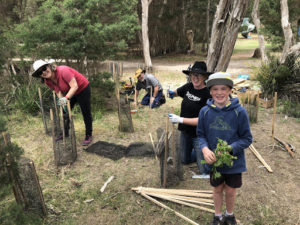 We are a resilient lot at Sisters Beach Wildcare. We keep turning up regularly to: put in new plants and protect them with tree guards; pull weeds out of the guards as these grow and threaten to smother the young plants; keep the grass down by periodic whipper-snippering; and put in a range of local native plant species, so we can test the survival of these, as the sea periodically floods the site. We now have over 20 active members.

And we have a new string to our bow. Now we are installing and staking down large boughs of paperbark that have lots of fine branches at their ends, at the front edge of the paperbark woodland, where it meets the estuary. Our hope is that, when the next sea surge happens, bringing debris with it, these fine branches will help catch this debris, and prevent the waves from washing the debris back and forward, taking out our newly established plants. 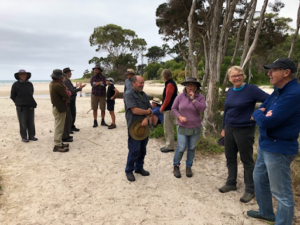 We keep working down at the site, on getting established a range of new species, and we celebrate the growth of the plants we have already put in – and what a great year it has been for growth, with the extra rain brought by a developing La Nińa, with a bit of help from the Indian Ocean Dipole! And we prepare for the next big storm, hoping that the branches we have put in will be a bit of a breakthrough in protecting our young paperbark plants at the estuary’s edge. If this works, it might be something that other groups facing similar problems around Tasmania, and elsewhere, might build on, to start trying out similar strategies.

And so we wait and watch and act, using a combination of ongoing community involvement and citizen science. We now call it the Penny Project.

We think that Penny would have approved.