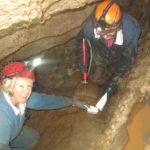 Karstcare has been operating for about 20 years and has notched up almost 4000 volunteer hours.

We mostly work at Mole Creek which is near Deloraine at the foot of the Great Western Tiers. It is about a 45-minute drive from Devonport and a 1 hour drive from Launceston. The area is famous for the quantity and quality of its limestone caves. There are 2 tourist caves in the area and several hundred “wild caves”, some of which are considered amongst the best in Australia. For more information check out the Parks and Wildlife Service web page www.parks.tas.gov.au

Our members assist PWS Rangers with a wide range of management activities, mainly underground. The skills required are a bit unusual compared to most Wildcare groups, and some of our work sites would be considered a bit ‘strange’. We do conduct the odd surface job with revegetation projects but the majority of our work is underground in caves, sometimes requiring vertical rope-work skills, climbing, squeezing and wading to get to such work sites.

Our project in Mersey Hill Cave on Jan 11 this year, was no exception.

Mersey Hill Cave has been known for a long time and has been visited by many people over the years, including some of the ‘non-caver’ community. Unfortunately, whilst visiting a particularly beautiful area, careless visitors tracked mud over a shelf of magnificent dogs-tooth spar (I think the visitors were more interested in taking photos of the magnificent formations on the walls rather than looking at the floor).

Six volunteers, all from Northern Caverneers Inc met at a road-side spot near Mole Creek and after the obligatory safety briefing we distributed the gear. Whilst walking down the steep hill to the cave entrance several flagging tapes were replaced and added to: the reason being that all-too-often, trips to the end of this cave are very long with a high chance of finishing in the dark: flagging tapes back up the hill assist with navigation.

We carried about 90m of poly-pipe, two pumps and two batteries, plus scrubbing brushes and two towels (used to filter dirty water).

The work site was only about 200m from the cave entrance, however this involved much crawling, a tight squeezy grovel, some wading in ankle deep water and a grovel in a very wet rocky stream bed with the roof only about 60cm above, dragging the gear. 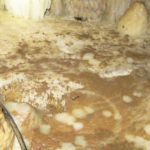 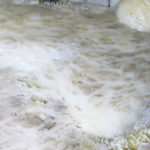 Once at the turn-off, a small temporary ‘dam’ was constructed to give a bit of depth for a pool to pump from. Flow from the stream was more than adequate for re-charging. We commenced laying out the poly-pipe, using valves often to maintain a head of water after it was established. This side passage required approximately 55m of poly-pipe to get to the site. Initially we had some difficulty getting water much past the second pump until it was discovered that this was designed in the opposite way to the first pump regarding inlet/outlet. Once we had water flowing, both the bottom pump and an in-line pump were left running on separate batteries, which gave a reasonable flow at the top end into a fire-fighting pump with a restrictor to give some pressure for cleaning. Both batteries were adequate for the cleaning period, which I’d guess was about 1.5hrs. Photos of before, during, and after cleaning were taken.

The area being cleaned is extremely beautifully decorated, with the dogs-tooth spar pools at its base. It is believed that the passageway continues higher up however there is too much mud to consider this and plenty of evidence of visitors having stood on the once pristine flowstone and dogs-tooth spar pools as well as attempts to climb in the general area. With scrubbing, spraying and using the towels to “mop up & filter” the area cleaned up surprisingly well. A bad stain was noted in one of the rear pools, however this was left as is, it being the remains of a small animal. Further cleaning was conducted on the flowstone climb up to this area, then  a string-line was left in place well below the decorated area, hopefully dissuading visitors from climbing too high but still allowing access for limited photography.

After re-rolling the poly-pipe and packing up all the gear, we returned to the entrance for a late lunch and a very steep walk back up the hill, arriving at the cars about 15:30. A few Spanish Health plants were noted for the first time; it is many years since we conducted a major eradicating project on this block, so disappointing to find this weed starting to re-establish.

We were very satisfied of a job well done: a ‘different’ reason to go caving.