by Cathie Plowman – Volunteer, Friends of the OBP.

Election Day 2022 started crisp and cold at Arthur River, and while service club members were setting up for democracy sausage sizzles and fund-raising raffles around the country, our team of 16 volunteers assembled at an Arthur River barbecue shelter to get into groups and drive off to their areas for the first winter Orange-bellied Parrot count of 2022. 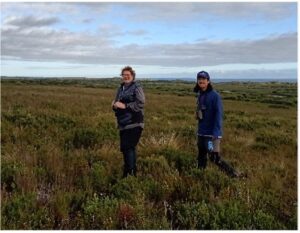 Everyone knew what they were doing, where they were going and who was in their group thanks to the pre-weekend organisation from Friends of the Orange-bellied Parrot President Marianne Gee. We all had preparation documents sent to us to read several weeks before and there had been a Zoom meeting to give more information and answer queries. For those of us surveying on the wind farms, there had been an online safety course (which was very good).

I was in a group with my husband David, our friend Cath (on days off from her local Parks and Wildlife Service job), Stephen (an old friend who I’d not seen for over 20 years) and Beth, an English woman who came for a short-stay in Australia as the pandemic ‘took-off’ and hasn’t moved on as originally planned. 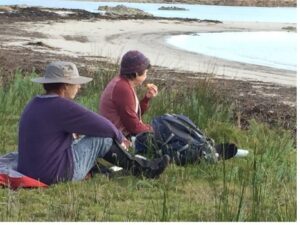 While our group headed north to nearby West Point, (where more than a dozen surfers were already in the water), other groups headed south. Marianne had to do some changing of plans as our weekend managed to coincide with the Parks and Wildlife Service doing extensive fuel-reduction burning. While we all studiously looked for OBPs there was no disappointment that we didn’t see any, as we all started the weekend knowing that there was little to no chance of this. 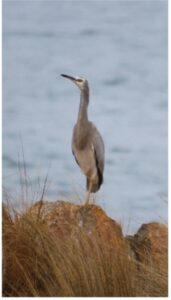 On the Saturday afternoon our group swapped over with Marianne’s group, and we went out on the road to Bluff Point, a place where Marianne and others did see two OBPs last year, so it was possible we might see one of these elusive small parrots.

On the Saturday all the groups swapped areas with another group during the day, which meant that all the areas surveyed that day had two lots of people check them intensely. But no parrots seen. I was hoping that at least I’d see a ground parrot.

Sunday morning and we woke to a change in Australian politics with many independents elected. We didn’t have time to get caught up in discussions about election outcomes as we were all in cars by 9.00 a.m. ready for the day’s surveys.

I was in a group of five that had an hour’s drive to the Studland Bay wind farm. We were met at the gate by staff member Chris and what immediately struck me about him was how professionally he treated us all. We had a safety briefing (and our induction training is now valid for two years) and then split into two groups to survey the wind farm and part of the adjacent coastline. The wind towers are alpha-numerically ‘named’ which made navigating the site straight-forward.

We’d heard from Chris that the wind farm company conducted OBP surveys for three years before the towers were installed and in the four years since, and no OPBs have been seen, so we didn’t get our hopes up re seeing one.

However, it was a great day of birdwatching in very pleasant conditions. We watched plenty of chats, flame robins, swallow, wrens, pipits and banded lapwings. 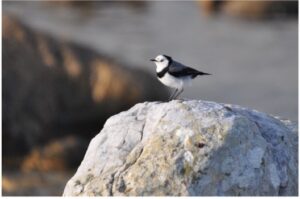 Some interesting ‘people stories’ from the weekend:

Medical student Lachlan (based in Burnie) who is new to birdwatching, saw 36 different species by the end of Day 1.

Recently retired couple Glenda and Peter came from Wollongong, NSW for the weekend, and also to spend it with Judy (Glenda and Judy having been friends since kindergarten).

A late autumn weekend on the West Coast could well have come with some turbulent weather, but no. We were lucky. Thanks to Marianne for her organisational efforts, both for a great weekend, and for the OBPs.