There was a special treat in store for pharophiles, or lighthouse lovers, who attended the second Lighthouse Conference at Low Head recently.  Held every two years, the event is organised by Thomas Gunn, the first one being held in Hobart in 2016. In keeping with the lighthouse theme, a contingent from the Wildcare branch Friends of Tasman Island stayed overnight in the former lightkeepers’ quarters adjacent to the lighthouse. 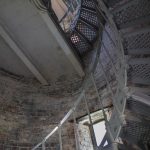 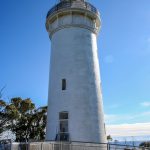 The boatshed at the Pilot Station was filled to capacity by the time the conference speakers were introduced.

The first speaker, John Watts, spoke about the Leading Lights which guide ships into the Tamar River. Navigation beacons were put in place at the entrance to the river in 1804 when the area was first settled. However, it was not until 1848 that two stone towers were built, but were unlit and gave no assistance at night. Two new towers, built in 1882, were first lit on 2 December that year. The original keepers’ cottages, with their distinctive 4 chimneys, can be seen close to each tower. 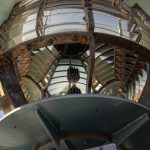 Steve Radford then took us on a Cook’s tour of the lights of the Furneaux Group, as seen from the air. This was followed by a historic look at the Eddystone Point lighthouse with Lindsay Dawe. An article in the Mercury on 8 October 1887 described the scene as workmen prepared to build the lighthouse. Over 70 men were camped in the area as they drilled and blasted the local granite for blocks to build the tower which was first lit on May 1st 1889.

It seems that even if you don’t have to have anything to do with lighthouses, you can use the image of one as a logo. After morning tea, the conference co-ordinator, Thomas Gunn, gave an interesting insight into the use of lighthouses as logos. A ‘Leading light in baking’ boasted the packaging of Lighthouse brand flours which have been milled in Fremantle, Western Australia since 1865. Locally, the Illawarra Primary School at Blackmans Bay uses a stylised image of the lighthouse on the Iron Pot as their logo and even needles, manufactured during wartime in England (which claimed to be pre-war quality!) bore the brand name ‘Lighthouse’. And of course, the shirts worn by the conference team also featured a lighthouse as their logo. 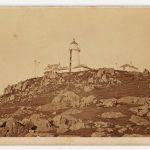 John Lee Archer’s name is synonymous with the design of colonial buildings in Tasmania. His second name, Lee, has been perpetuated through his descendants since he arrived in Tasmania in 1827 to take up the post of Civil Engineer and Architect for the fledgling colony. Anne Lee Archer has done considerable research on her forebear, who also designed the original lighthouse at Low Head and the Cape Bruny light.

Opening lighthouses to the public can be a tricky business. Karl Rowbottom, a former keeper at Tasman Island and tour guide at the Table Cape lighthouse, spoke of the trials & tribulations experienced in satisfying the authorities so that the tower at Table Cape could be opened for tours. 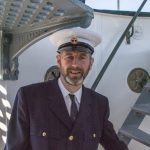 The Low Head lighthouse is not normally open to the public and it was a special treat for conference delegates that it was open for inspection, thanks to Rod Harris, the Senior Field Technician with Australian Maritime Systems. Climbing the cast-iron spiral staircase of the 19 metre tower, we reached the lantern room where we were able to watch the Chance Brothers 3rd order lens continually rotating. FoTI’s Chris Creese was assisting with the tours, kitted out in a lightkeeper’s uniform, once worn by long-term keeper at Low Head, Cyril Griffiths. From the balcony there was an extensive 360o view over Low Head, the Tamar River and the waters of Bass Strait and we could hear the Chance Brothers fog horn, restored by volunteers in 2000, sounding like the ‘roar of a thousand elephants’.

The final sessions included lighthouses during World War 2, researched by Anne Green, and Rod Harris, who spoke about his work with the Australian Maritime Systems Group in maintaining lighthouses around Australia.

A raffle, run in conjunction with a stall which had been operated by the Friends of Tasman Island throughout the conference, was finally drawn. Thanks to artist, David Edgar, Tasman Island Cruises, Sea Change Safety Cove, and FoTI, who supplied the prizes; and the raffle winners, former lightkeeper, John Thompson, FoTI members Di Smith and Scott Bell and a member of the conference team, all of whom helped raise a tidy sum towards work on Tasman Island. 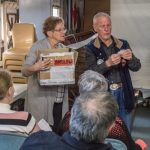 Thomas Gunn closed the proceedings by intimating that a 3rd conference, in 2 years time, could be held at Devonport. 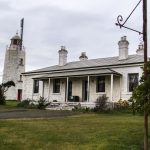