Notes from a ‘Newbie’ 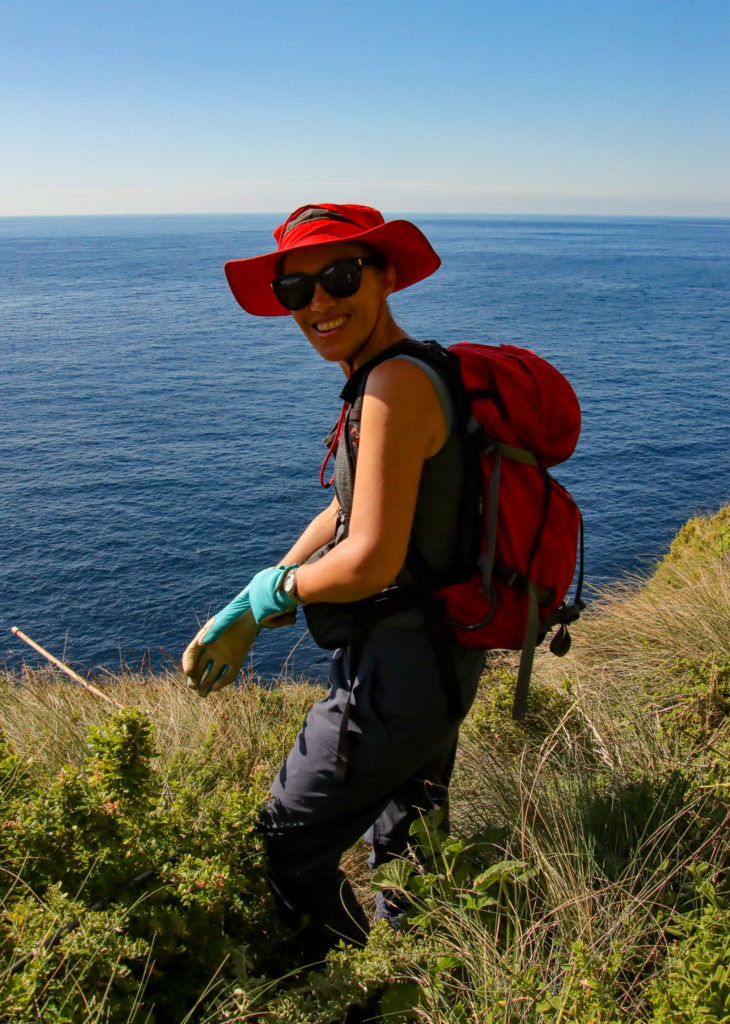 My very first introduction to Tasman Island came at an early age; as the daughter of a yachtsman, the significance of this landmark—geographically, navigationally, geologically and historically—was impressed upon me as we circumnavigated its shores on a day when the weather was kind and the sea calm. Later in life I gazed upon it from the opposite clifftops as a walker on the Three Capes track, the island revealing itself momentarily from behind a veil of mist, once again commanding my attention, imagination and reverence. But it was as a passenger on a Pennicott boat that I finally resolved to contribute, however small, to the preservation of this tiny corner of the globe; this enormous ‘wedding cake’ that imposes itself on the roughness of the windy seas at the tip of Tasman Peninsula.

Not for a moment could I have foreseen the opportunities and treasures that would lay themselves before me when I joined the Friends of Tasman Island, most notably the people themselves; a variety of dedicated, generous, welcoming individuals who combined form the well-oiled machine that is FoTI. The vast array of knowledge, skills, experience, ideas, creativity and resourcefulness is impressive and wonderful; these are some serious passionate individuals who truly love their island! And it’s not hard to see why. In April 2021 I was exceptionally fortunate to be presented with the opportunity to participate in the Easter Working Bee. It is hard to summarise the experience in words, but I can categorically state that, for me, it has been life affirming. 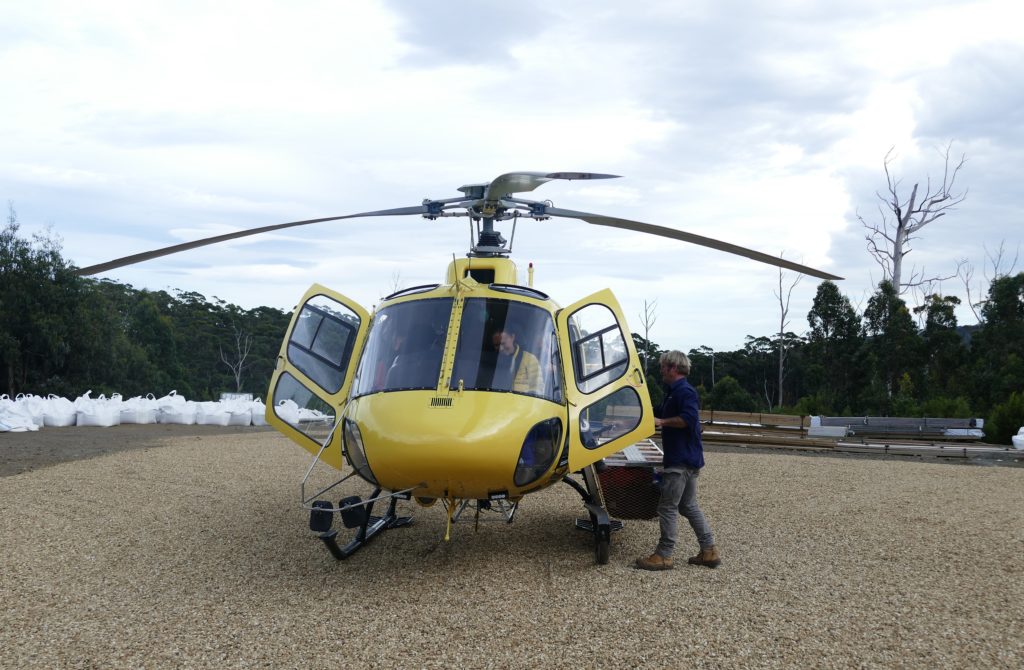 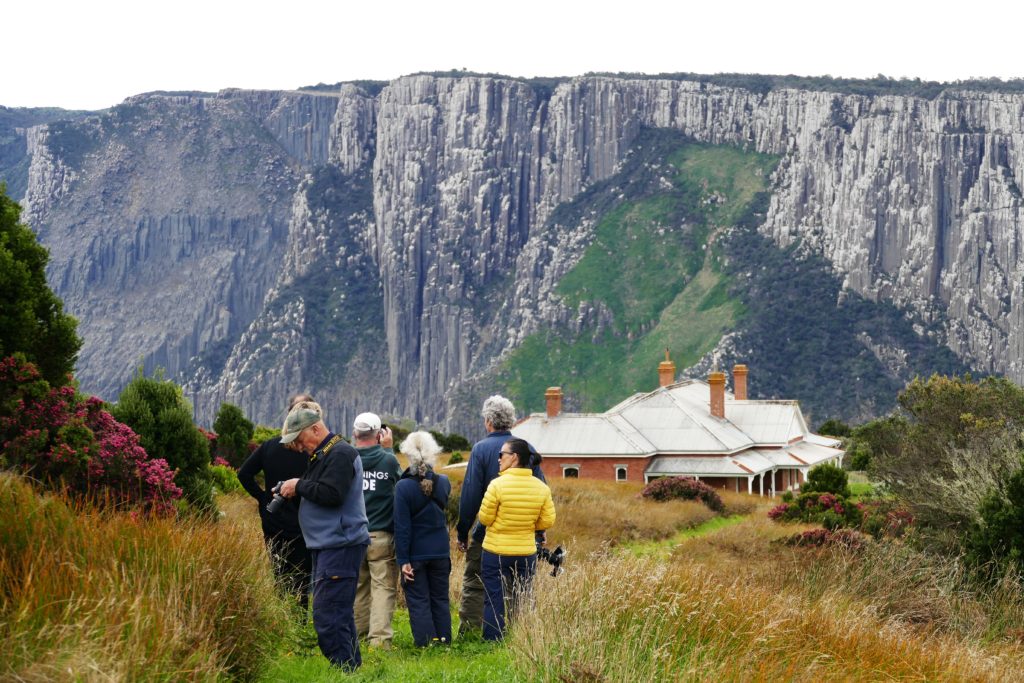 Arriving by air was an exhilarating moment, partly because I’d never flown in a helicopter before, but also because the approach to Tasman Island was breathtakingly stunning. The views of the island from above formed the perfect introduction to the ruggedness and isolation of this special place, its lighthouse and quarters firmly
planted, like sentinels steadfastly waiting for much-needed care and attention. I had no expectations or pre-conceived ideas of what the island, the people or the working bee would be like. All I knew was that I was blessed to be there. The walk towards the lighthouse from the helipad reinforced to me the remoteness, the grandeur, the privilege of being there; the ‘Tasman National Park’ sign prompting much internal excitement for me, tangible evidence that I was indeed finally there! 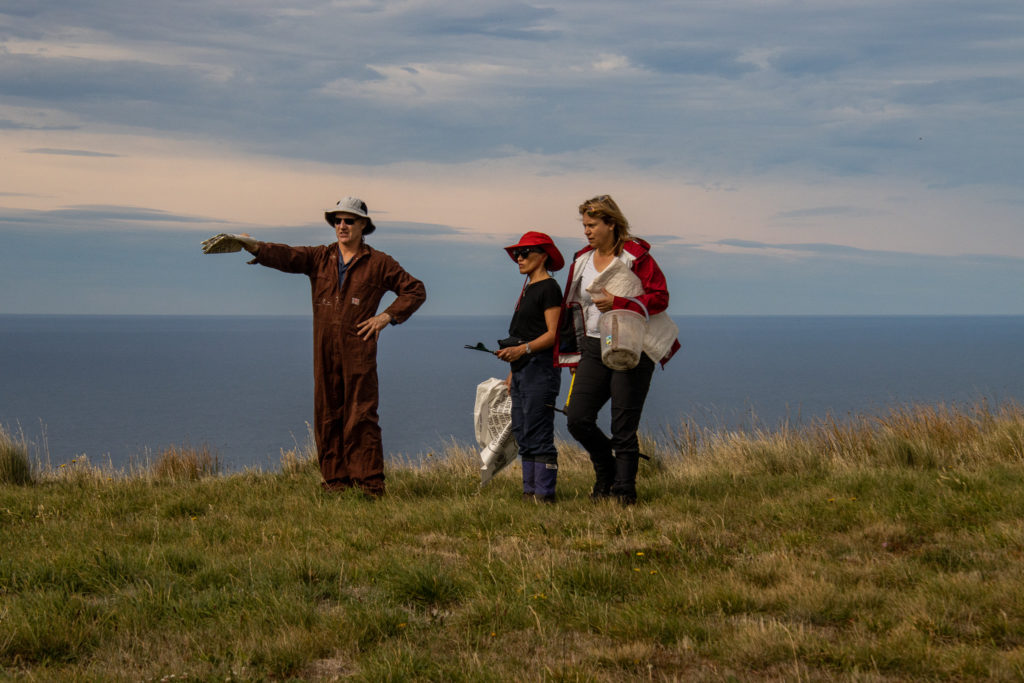 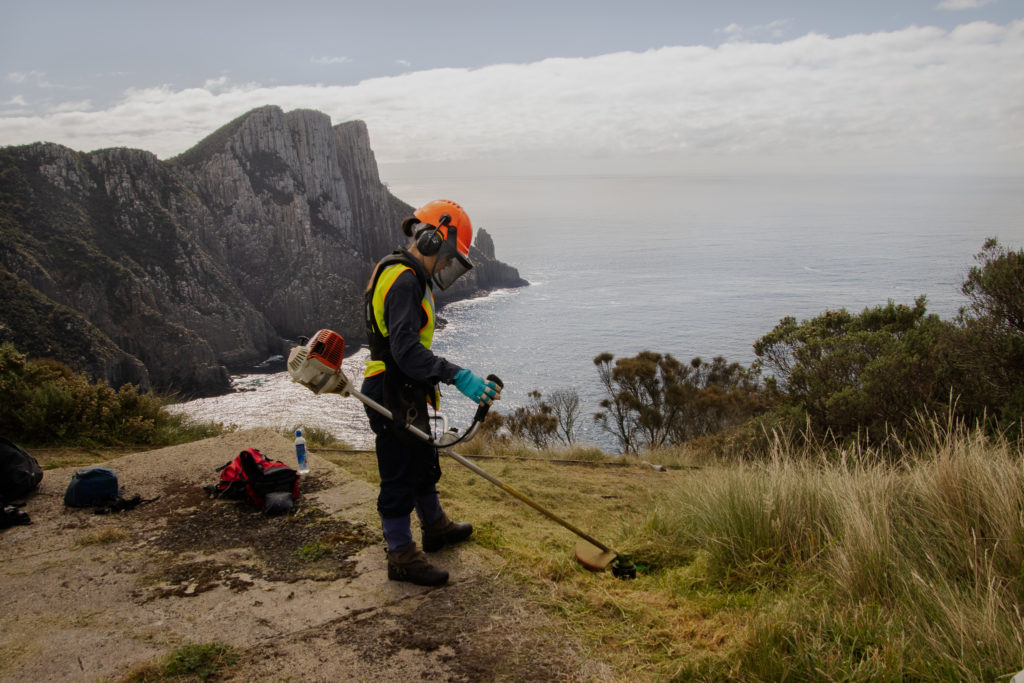 The unpacking, settling in, induction and island tour ran smoothly and efficiently, thanks to the expertise of the experienced team members whose friendly, supportive and welcoming nature became instantly apparent. As a ‘newbie’ I felt safe and at ease amongst the ‘strangers’ who would quickly become very dear to me; a reassuring prospect considering escape was not a viable option for any of us! Although we arrived under grey, ominous skies, the weather was exceptionally mild and conducive to all manner of outdoor tasks. No time was wasted getting started, and I was impressed by the leadership, enthusiasm and motivation displayed by all. It was obvious from the outset
that we were to take advantage of the favourable conditions and plough as much energy and effort in to completing some of the external jobs from the exhaustive ‘to do’ list. Regardless of where I was or what I was doing I felt like a kid in a candy store—unquestionably content! Everywhere I looked there was something fascinating to take in, and the profound privilege of working in such an amazing ‘office’ was never lost on me. In fact, I don’t think I’ve ever been so happy squeezed between a mouldy wall and a water tank! 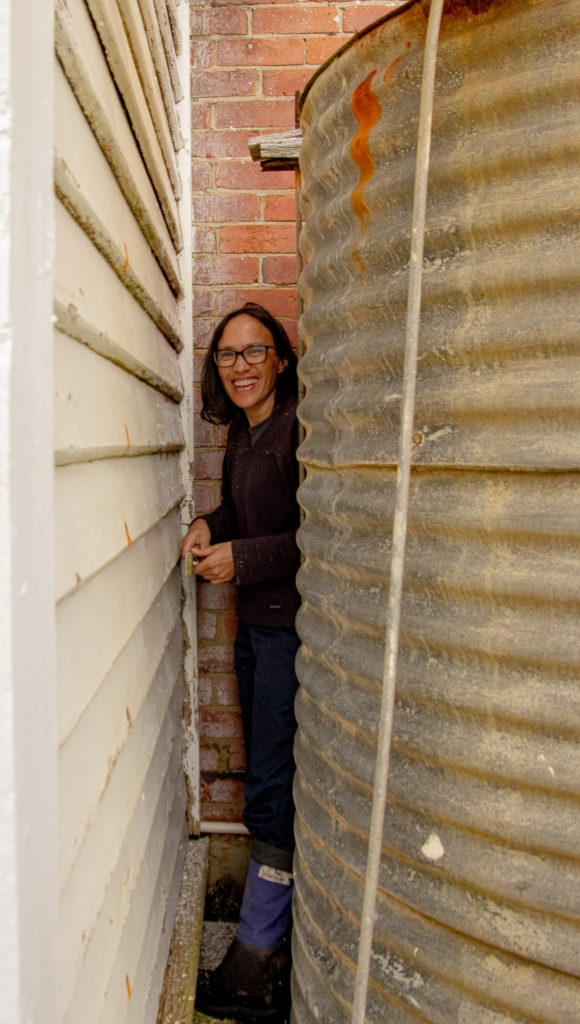 Over the course of subsequent days everybody continued with the tasks they’d been assigned – priorities dependent upon time, weather and availability of materials. I thoroughly enjoyed my time on the brush cutter, all the while refraining from the temptation to cut my name into the scrub so it could be seen from space. There were frustrating times too, moments when despite my best efforts I had to admit defeat and seek assistance from others. Thankfully, nothing was ever too much trouble and everyone was willing to help, such was the level of teamwork and camaraderie.

Of course, it wasn’t all hard work and no play. Time was set aside to explore the stunning landscape and all it had to offer. We had the chance to drink in the beautiful sunset from the western clifftops, watch the magnificent sunrise whilst traversing the eastern edge, experience the thigh-burning descent to The Landing and subsequent ascent of the haulage way, and explore some of the more unusual features to the northwest. Having field naturalists amongst the group opened my eyes to the myriad of insect, bird and plant life that thrives on the island, often unnoticed or unseen. Their passion for the natural world coupled with their inherent inquisitive nature reminded me of what it was like to be a child again—to be captivated and totally fascinated by all things weird and wonderful. 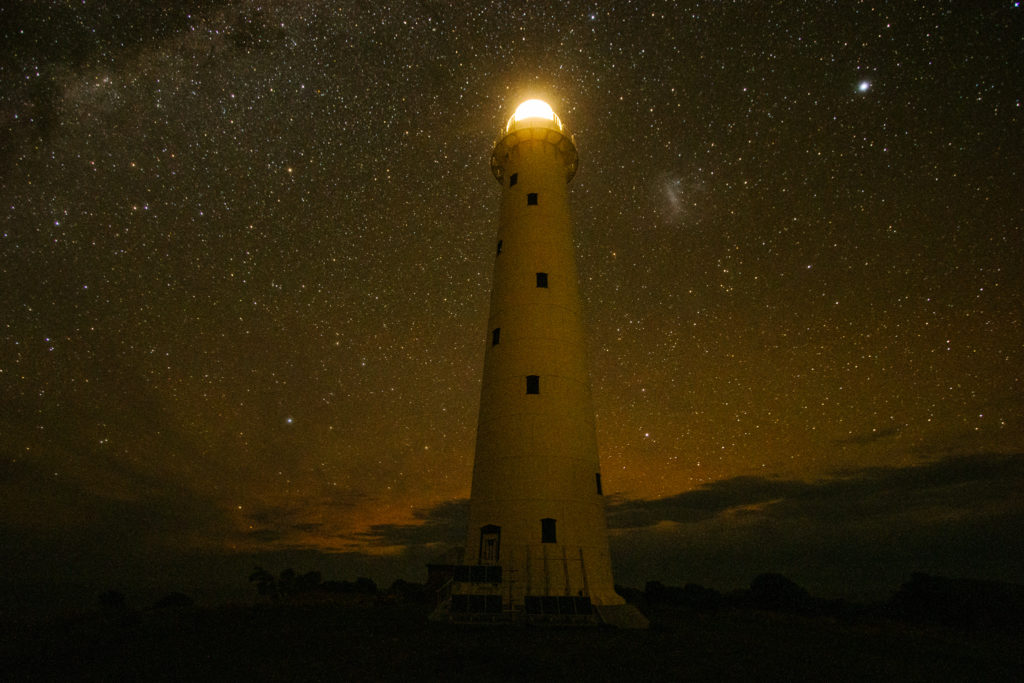 The nights were beautiful, especially under clear skies. The blue-black backdrop of the cosmos, punctuated by billions of stars so bright you could almost touch them, was
mesmerizing and spellbinding. To top it off, if such a thing is possible, the lighthouse provided its own spectacular light show with great, rhythmic beams emitted out into the darkness while simultaneously projecting hypnotic, kaleidoscopic illuminations against the tower ceiling.

A forecast of bad weather put a premature end to our stay. Admittedly, I would have been happy to be ‘stranded’ for several more days, keen as I was to hunker down and experience some ‘real’ island elements, but it was not to be and we were ushered off safely and without incident. Although my time was cut short, I am utterly grateful to have been able to contribute and I am so looking forward to the opportunity to return.

Thank you, Friends of Tasman Island. Thank you, Easter Working Bee Team of 2021 — you are legends!