Crowd-funding as a means of raising funds for work on Tasman Island has been a new venture for Wildcare and Friends of Tasman Island.

The project for 2017 was to restore the sunroom and verandah of Lightkeeper’s Quarters 2 (Q2). The crowd-funding was a huge success thanks to FoTI’s president, Carol Jackson and her team of enthusiastic volunteers. It’s also thanks to everyone who pledged to our campaign that FoTI’s 26th working bee on Tasman Island finally got under way!

The logistics of transporting nearly 2 tonnes of building materials to the island by helicopter were mind-boggling. After a site visit, builder Chris Smith put together a long list of materials needed. These were then purchased and delivered to a central location where Chris Creese and Gary Gay spent a number of days weighing and securely packing everything, before delivering to the departure point.

On the appointed day, the team of volunteers met at the Simmonds Hill helipad, near Fortescue Bay. From there, Osborne Aviation flew everything (building materials, food, personal gear and passengers) to Tasman Island. Our 10 days on the island were about to begin and after a briefing and orientation tour, it was full steam ahead, working long hours to achieve our goal. 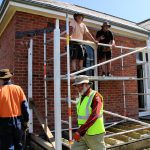 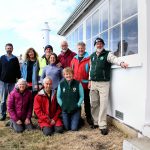 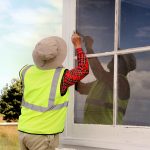 To complete the job in just eight full days was a big ask. First we mowed and brushcut to make access to the site easier, then we erected scaffolding. There were two builders on site – Chris Smith and David Davenport – and with the help of other members of the team it wasn’t long before the remnants of the old sunroom were demolished.

Footings were then prepared and lots of pencil sketching and calculations were required to ensure that everything would end up plumb and square. A new lintel and corner post were made and floor joists cut to size and installed. Artist Luke Wagner, who was soaking up the atmosphere for a future exhibition, found a sheltered spot behind Q2 to exercise his painting skills on the underside of the floor boards.

We all had “too much wind in our heads”, as Carol’s Mum used to say to her. But work continued regardless. By Day 4 wall plates were installed with new masonry anchors and we had a new entry door frame and threshold.

It was fortuitous that rain damped down the site overnight. David, our accredited asbestos removalist and his team, donned safety gear before removing corrugated asbestos sheeting from the roof. This was wrapped securely in plastic and stacked in a crate, ready for removal. New corrugated iron roofing was then installed. Work continued till late in the day, as Dave and Luke were leaving the next morning.

As we farewelled David & Luke, four more volunteers arrived. Jo and Brett teamed up to continue the programme of weeding, first commenced in 2009 while Rob joined the building team. Mark swapped cooking duties for brushcutting while newcomer Michele joined Carol in the unenviable task of preparing meals for the hungry hoards. It was thanks to Hooters Tasman Island Restaurant and its team – Carol, Mark and Michele – that everyone was very well fed. 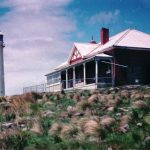 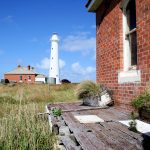 While work on Q2 continued, Erika, FoTI’s photographer and historian, recorded work as it progressed and completed a photographic survey of historic artefacts on Tasman Island.

The pace over the final couple of days was hectic. A new verandah post was fitted, window frames erected, glazing bedded in, guttering, flashings and downpipes installed. There were many last-minute touches including a handle and bolt fitted to the front door.

A sighting of black cockatoos confirmed the Bureau’s forecast that the weather was deteriorating and it was decided to evacuate the island a day early. Luckily we had reached lock-up stage before our working bee came to an abrupt end. However, there was satisfaction all round – we had achieved our goal of restoring the sunroom and verandah of Quarters 2. And this was made possible by the many supporters of our crowd-funding campaign who followed our progress, via Facebook.

A big thank you to everyone – we’ve only just begun ….