You wouldn’t want to be a blackberry on Tamar Island! 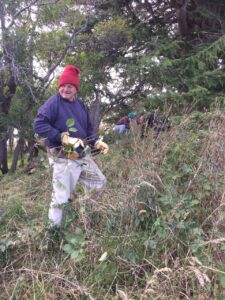 Weeding is a high priority for many Wildcare groups as they seek to restore native vegetation and habitat in the areas they love.

How many times have you heard weeding described as a ‘battle’ or a ‘war’? It’s certainly one that requires consistent effort and patience.

In the language of battle, the Friends of Tamar Island Wetlands Reserve have been on the attack and the island’s blackberry population is worse off as a result.

Encouraged by how much better the area tackled in February looked, the assault was continued during the group’s second quarterly working bee on 18th May.

They will keep up the fight with another battle in August – probably on a Sunday.

Keep an eye on the Wildcare Events Calendar to join in or contact foftiwr@gmail.com with questions or suggestions.