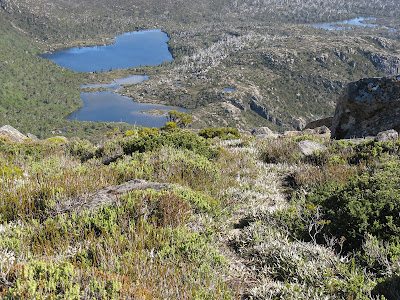 In May 2007 we commenced work on the Tarn Shelf in an attempt to confine traffic into a single track.
The shelf had become degraded by walkers trying to avoid muddy sections of track and causing track braiding plus creating a whole lot of small pads going all over the place and  quite a lot of pads and in parts this resulted in it being very hard to tell what was the real track and what were the false tracks. These were quite extensive over much of the area.

Many sections of braided track were rehabilitated and a hardened rock surface installed to  make the track distinct and easier to follow. Secondary tracks were closed, of which there were many, by using direction poles with arrows and some closed using X closed signs.

At the time several coordinates were recorded with a GPS  and photos taken.

The work continued regularly until 2011 at which time we had to completed all that we intended to do. It took 12 days of work.

In October 2018 a survey of the first part of the shelf was made and new photos taken points at the points from that period 2007 to 2011. This was to allow  a comparison with the orginals to record any changes that have taken place.

At first glance it often seemed that very little improvement had taken place, but on closer examination of the photo sets there was ample evidence of change for the better.

A website contains the original images and the follow up ones from 2018 and shows the changes that have taken place. 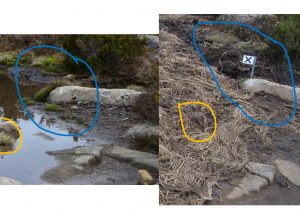 Low vegetation and grasses are establishing where the area was previously heavily trampled from people avoiding the bog.
The photo on the left is from 2018 and on the right in 2007