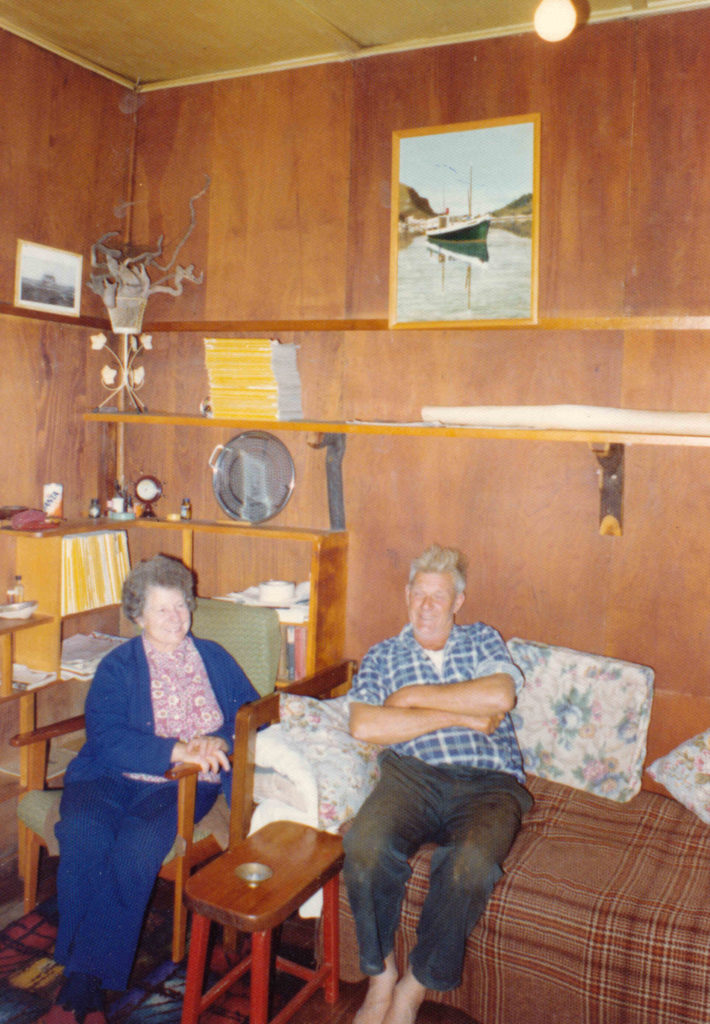 Win and Clyde Clayton created a simple and welcoming home at Bathurst Harbour in the State’s southwest. Claytons Corner is still a cosy shelter and a meeting hub, which benefits from Friends of Melaleuca’s ongoing care and maintenance.

At FoM’s September meeting last year, Chris Creese suggested re-creating a more homely look to the living room by finding objects to replicate some of those in Win and Clyde’s living room fifty years ago. A treasure hunt ensued! Fortunately there are several old colour slides for reference. The aim of this little project is to provide a sense of welcome for visitors and inspire an appreciation of the historical context. 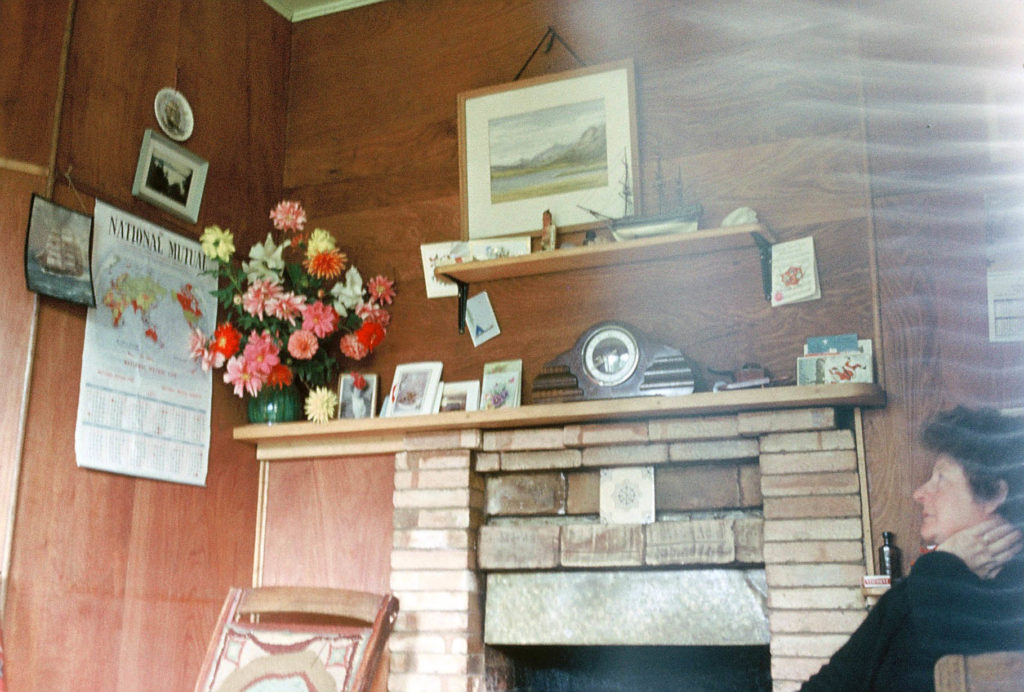 Win’s treasured Art Deco mantel clock was always a feature of her living room. It was a special gift from Clyde when he was wooing Win and a step up from his usual bag of crayfish. Melissa Smith rose to the challenge and braved an auction to procure a clock almost exactly like Win’s. Thank you Melissa for that terrific donation! Above the mantelpiece Win hung a watercolour of Mt Anne from Lake Pedder, by acclaimed Tasmanian artist Elspeth Vaughan. This painting was significant for Win for several reasons. Elspeth had stayed with the Claytons at Bond Bay when they lived there in the 1950s. Mt Anne can be seen from the beach at Bond Bay and the painting would have evoked Win’s memories of her intrepid bushwalks to Lake Pedder from Fitzgerald with her brother (Deny King) in 1935 and 1938. I have inherited this painting from Win. FoM had the painting expertly photographed and printed by Simon Olding and the reproduction framed by Phil’s framing in Margate.

Clyde was an inveterate boat and ship lover. The kitchen looks like a galley and Clyde installed a porthole in an internal plywood wall of the dining area. After the Claytons retired, the house was neglected for some time and the porthole disappeared. Bob Cleary located a replacement with pertinent historic associations. It came from Belle Brandon, a fishing ketch once owned by Clyde’s maternal grandfather and kept as a working boat in the family for fifty years. Later, Clyde owned Belle himself for a few years in the 1980s when he lived at Franklin. Now her porthole fills that incongruent hole in the wall at Claytons Corner. Thanks Bob! 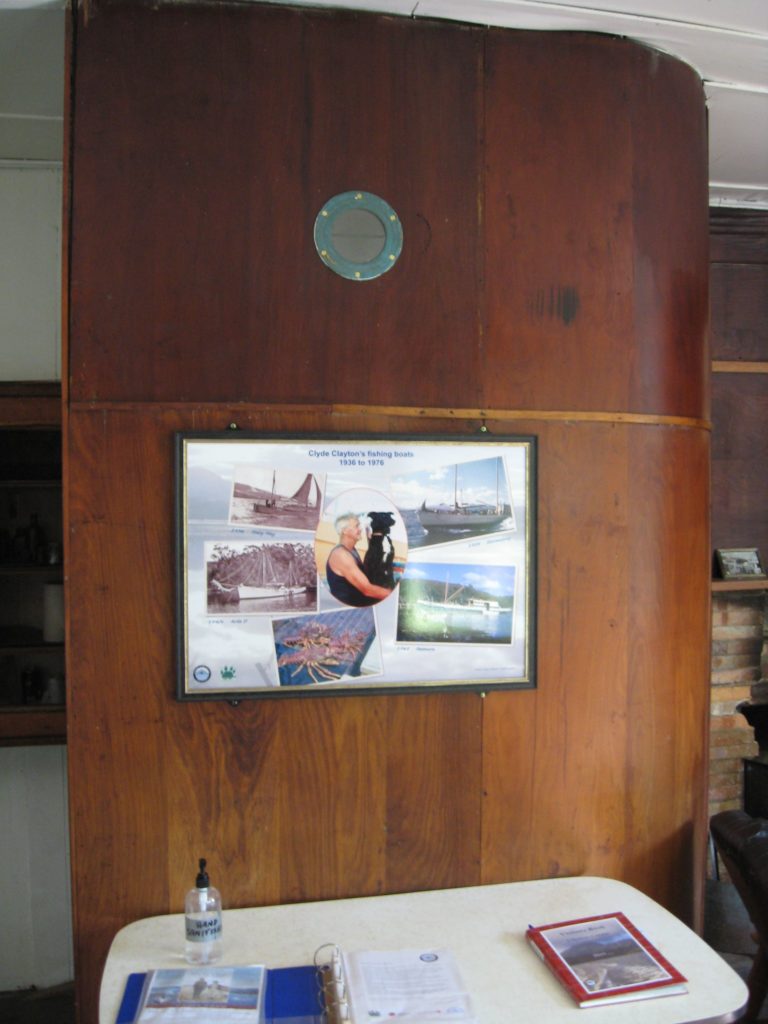 Being a man with such nautical interests, Clyde made several ship models. A model of Cutty Sark, donated by one lover of boats to another, is an apt addition. Thank you Nicholas Banfield. We had an acrylic case made to fit by Associated Plastics, to keep the model safe on the shelf at Claytons. Leanne Banfield also found and donated a vintage engraved steel tray just like the one in our reference photo. Thank you Leanne.

A few more objects have been found, donated and constructed for this treasure quest. Among those yet to be taken to Claytons are a small ship’s-wheel barometer donated by Deb van Velzen; vases donated by Anne Brook (complete with plastic flowers); a ‘Tall Ships’ calendar that belonged to Clyde, and believe it or not, replica cigarette packets! Clyde started smoking in his mid-teens and never gave up (cough, cough) so there were always Viscount packets and ash-trays near his chair. I could not believe my eyes when Suellen Hill ever so skillfully made some extremely convincing reproductions. They are amazing! We are thinking about safe ways to display them. Thank you Deb, Anne and Suellen!

Thanks to Rob Banfield for organising a number of these objects and installing them at Claytons – a job which included making a new shelf. The missing shelf had two grown knees. One protruded forlornly out of the wall, shelf and second knee gone. A dusty bag of grown knees from way-back was unearthed at Melaleuca and a suitable one selected, enabling a shelf, like the original, to be fitted. 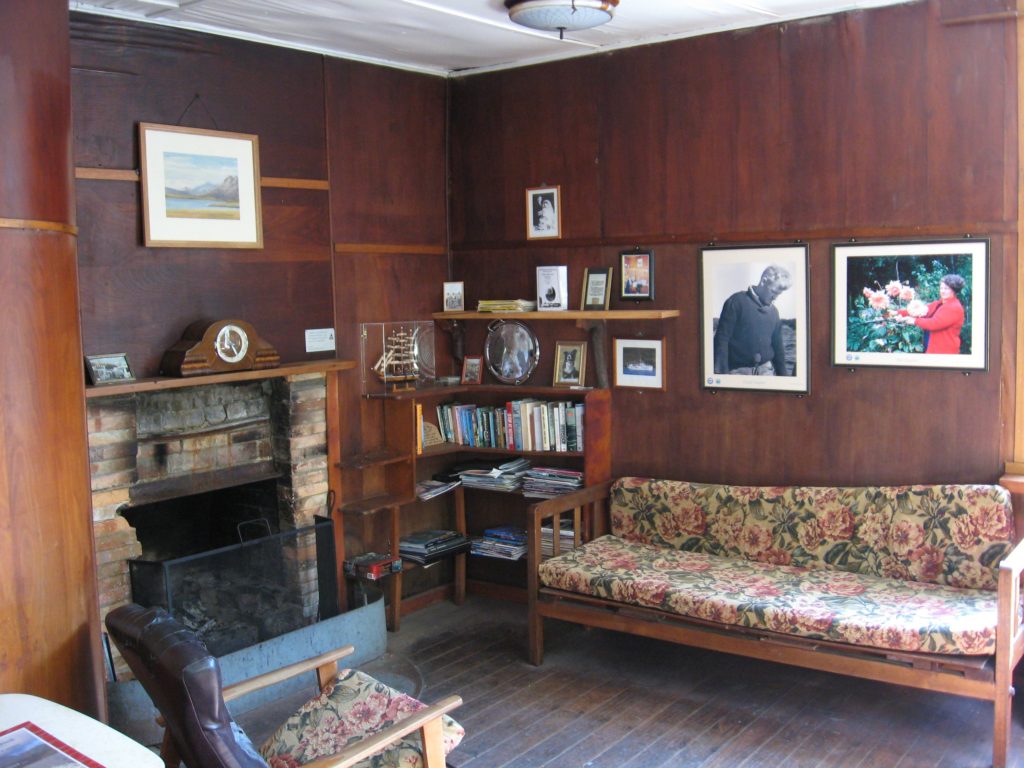 There are books on the bookshelf, including some ‘Your Garden’ magazines donated by Helen Statham (Win was an avid gardener) and some National Geographics. Also books for ‘bookswap’, popular with weatherbound yachties. Contrary to popular opinion, the television is not the original. It was donated several decades ago by G Mason (boat ‘Sheerwater’).

We are still on the lookout for a few odds and ends: a small decorative wall plate with ship picture; ivy-leaf metal plant stand in the corner; wooden wheelbarrow like the one pictured on the mantelpiece (possibly an ashtray); picture-frame for a portrait of Win’s mother; light shade; a Fanta can and even a ‘hooter’. Win used the hooter, installed on the outside corner of the house, to summon Clyde away from the jetty and his precious boats at dinnertime!

Nothing like a good quest. And the hunt goes on!