This is the story of a string of flukes. Really it starts in 1959, but we’ll get back to that later.

Recently, Jean Jackson purchased a 35mm slide projector from a tip shop. It was a Hanimex carousel projector, high tech in its day, and she chose it from a row of other solid, functional but now obsolete projectors, superseded by today’s digital technology. Jean wanted to view her own slide collection, but had problems with the slides not loading all the way in her “new” projector, resulting in a shadow apprearing on the images. This rotten luck turned out to be the first happy fluke. She took the projector to Walch Optics where the trouble was identified as a jammed slide. Problem solved. She was given the offending slide carefully contained in a ziplock bag — fluke 2, it didn’t go in the bin! She read the handwriting on the cardboard slide mount: “C Clayton’s Home, Bond Bay Nov 1959. I stayed 2 nights here.” Wow! thought Jean, 1959! She had camped at Bond Bay herself on a kayaking trip. Because she recognised the name and place, the slide was rescued from oblivion. What a fluke! 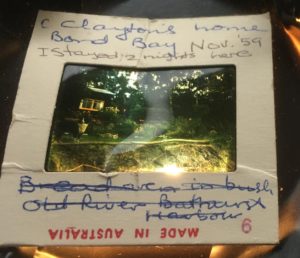 Jean knew a few people who would be interested. She packed the projector and slide into her bike pannier and trundled homewards, stopping off at DR Marine on the way (a workshop full of colour, the friendly clatter of sewing machines and welcoming cuppas). Dave Ross, a chronic Port Davey addict, tour guide and Friends of Melaleuca (FoM) volunteer, was excited when Jean showed him the slide – slightly bent as it was. Dave photographed it then and there and emailed the picture to us. The excitement grew! There are very few photos depicting that place at that time, so this was a significant find, a little piece of history. Our nephew, Hugh Tassell, very kindly scanned the slide and enhanced the image so no crease is visible. 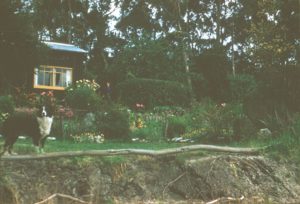 The photo depicts Win and Clyde Clayton’s home at Bond Bay, Port Davey, in 1959 – a handy spot for a Port Davey fisherman. In front of the oiled vertical board house is Win’s flower garden, pretty with November blooms. To the right of the clipped hedge and out of sight, is the vegetable patch. Three figures stand to the right of the house -Win on the far right. (I can’t quite identify the other two.) Poised and alert on Win’s lawn stands the Claytons’ Border Collie dog, Ring. The photographer is standing on the beach, and in the foreground of the image you can see the erosion. Huge seas leaped up into the garden in a series of storms, causing the Claytons to move and rebuild their house at Clayton’s Corner in Bathurst Harbour in the early 1960s. Today, foreshore erosion is particularly manifest on the north-east beach in Bond Bay.

But who was the mystery photographer? We put on our forensic hats and compared the handwriting on the slide with that in the Clayton’s visitors book. (A copy of this visitors book is at Clayton’s Corner. Scanning and printing it was an FoM project kindly sponsored by Roaring Forties Kayaking.) Out of the few visitors in November 1959, Elaine Pearce’s handwriting matched that on the slide.

Elaine Pearce was a friend of Margaret King, my mother, who was thrilled when her friend Elaine came to stay with our family at Melaleuca for three weeks. Elaine landed in a light aircraft on the brand new gravel airstrip, completed only the year before. She spent her time exploring, botanising and yarning, and our family took her on several boat trips aboard ‘Melaleuca’, including visits to the Claytons and Edwardsens at Bond Bay. (Freddy Edwardsen was Clyde’s crew. Like Win, he and Laurie also had a colourful garden at their place further along the beach.)

While staying at Bond Bay, Elaine, Win and Deny made a day walk over to the West Coast. During her Port Davey holiday, Elaine surely must have taken other photos. Do they still exist? That is a quest for another day!

Thanks to Jean Jackson, Dave Ross and Hugh Tassell for their parts in the serendipitous saga of the stuck slide. 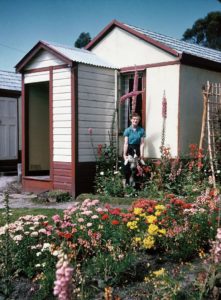 Photo captions:
1. This mangled slide was stuck in the projector. Photo: Dave Ross.

3. Scan of the entries for November 1959 in the Clayton’s visitors book.

4. Clyde’s fishing crew Freddy Edwardsen also lived at Bond Bay with his wife Laurie. The decayed PWS shelter stands beside Freddy’s house site. (And in case the weeders among you are anxious, no foxgloves or lupins survived!) Photo: Clayton collection.