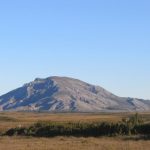 A team of 13 keen volunteers gathered at Melaleuca on 13 March 2019 for the annual working bee. Participants either arrived by plane that morning or had already arrived by boat. For those flying in, there were first-hand views to be had of the legacy of the recent extensive fires in the South West and we observed ‘close-calls’ for the Snowy, Anne and Western Arthur ranges. (The Eastern Arthurs were under cloud on the day.)

Melaleuca was the usual early-autumn buzz of activity associated with a range of people: the 2019 VDL Circumnavigation Cruise, independent yachting visitors, bushwalkers, Parks and Wildlife Service staff and Wildcare volunteers — Melaleuca caretakers, Friends of the Orange-bellied Parrot as well as our working bee team. 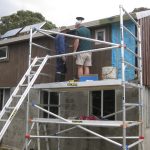 Paul and Mark at work, Willsons’.

And what a team it proved to be! Before lunch on Day 1 several crews had their jobs well-advanced: Andrew and Mitch immediately got to work sorting out the electrical work on the windmill generator at Barbara Willson’s house. Meanwhile, Paul and Mark (our ace building team) had erected the brand-new scaffolding beside the Willson house and had commenced re-cladding, while Barbara and OBP volunteer Sue were busy painting the new timber. The Willson house is a regular base for OBP volunteers and researchers. Up-keep of the house and facilities maintains the house as a base for all concerned, including working bee volunteers who stayed there and the whole team who enjoyed some hearty evening meals there.

Nearby, the historic Rallinga Mine smelter shed was having the roof re-clad, initially by Chris and Rob, and the following couple of days by Rob and Mitch, all under the watchful eye of a large tiger snake who was regularly observed nearby.

While building maintenance was in full-swing, Janet lead a team of Helen, Jenny and Cathie to do a field-assessment of historic tin mining equipment. This was photographed, maintenance needs documented, and a data-base for ongoing records was prepared. Subsequently Cathie and Sue did this year’s fish-oiling.

Meanwhile at the Kings’ place Geoff and David tackled the final portion of side-wall in the house restitution project – great to have that stage competed. Their next job was to refurbish the unsafe section of wharf within the heritage boatshed. 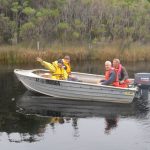 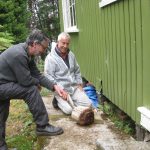 No wonder the floor was wobbly!

There were three days of full-on activity at Claytons, where the team of Rob, Helen, Jenny, Andrew and Ian carried out a huge range of jobs including exterior painting, interior improvements such as cutting and fitting slats to the beds, sorting out rubbish and firewood. Claytons is quite a haven for kayakers and yachties and the beautiful interpretive panels show life here in times gone by, with lovely photos keeping alive the memory of Win and Clyde Clayton. 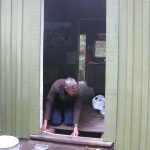 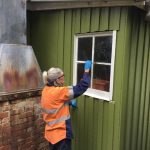 Meanwhile Janet, Cathie, Ian and Ken (caretaker) planned new interpretation at Melaleuca; panels for the two bushwalkers huts and a mining heritage walk to link together the old mining equipment and associated stories. 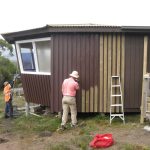 Cladding up-grade on the museum 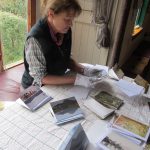 The Deny King Heritage Museum had additional cover-strips added to weather-proof the cladding, and these were painted. The broken propeller from a 1947 aviation mishap was mounted as a museum exhibit. Souvenir greeting cards were packed and sales via ‘money in the jar’ was successfully commenced in the museum as a Friends of Melaleuca fundraiser. 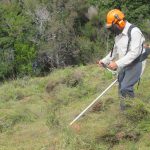 While all this was occurring, Tony (OBP volunteer) did a considerable amount of brush-cutting to maintain firebreaks and Shirley (Melaleluca caretaker) greeted visitors and kept facilities scrupulously clean. 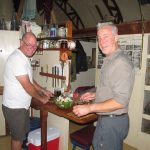 Throughout the week a range of other cleaning and painting jobs were attended to. Each day finished with a hearty communal meal, conversation and merriment. The week culminated with a boat trip out to the Breaksea Islands on the final afternoon, with Geoff, Janet, Chris and Barbara providing interesting historic commentary.

Wednesday 20 March and those departing by plane were packed and ready for the 0900 pick-up, but in true South West style, the plane was delayed by cloud, so various jobs continued in extra-time. A huge thank you to everyone concerned for their work and enthusiasm. 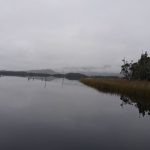