A $2000 grant assisted volunteer flights to Melaleuca and contributed to the annual freight-in/rubbish-out boat trip organised by Tas PWS. In this place where no roads go, these are Friends of Melaleuca’s greatest costs.

Rubbish removal is a problem at Melaleuca because of transport and freight costs as well as logistics. It was heartening to see 11 heli-lift bags of accumulated rubbish disappear down-river to be loaded aboard the fishing boat ‘Jean Nicholls’. Thanks Charles. More rubbish was generated during the working bee, including building scrap and bits from demolishing a fibreglass/plywood dinghy. Anything potentially useful was salvaged! Scrap was collected, bagged, then taken away by one of our boat-owning volunteers after the working bee. Thanks Bob. 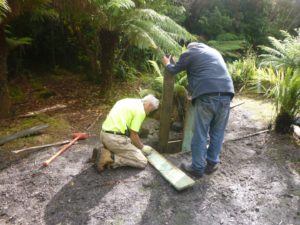 Our week-long working bee saw small teams of volunteers engaged in a variety of jobs: weeding and vegetation clearing; brushcutting fire-breaks; electrical maintenance; routine maintenance of heritage objects and maintenance on accommodation, tracks and drains. Maintenance is always necessary on any built structures in a wet environment like this!

Interpretation of historic heritage is an important arm of FoM’s work. A volunteer with GIS experience began the quest of surveying the exact location of an emergency runway built here in 1948 to enable a twin-engine plane to take off after a mishap on landing on the buttongrass! Most of the cord-wood and gravel runway is now hidden under soil, buttongrass and tea-tree.

Maintenance work continued at Claytons. Over the past several years major stabilisation and restoration of the building and site has been achieved following major work by the original Friends of Claytons partnership group with PWS. Many small jobs were accomplished this year including re-establishing original pathways.

Maintenance and restitution work continued at the private leases, the hubs of our gatherings. Roof work continued with a small building team to redress deterioration at Kings. General maintenance continued at Willsons, which is a home as well as a key Orange-bellied Parrot monitoring facility.

FoM worked in collaboration with PWS staff. Thanks to our very supportive Ranger-in-Charge for the Southwest, Ian Marmion, and capable Field Officer, Steve Locke, as well as proficient PWS caretakers Lisa and Scott. And thanks to the volunteers who so enthusiastically gave their all for the week to achieve another highly productive working bee. 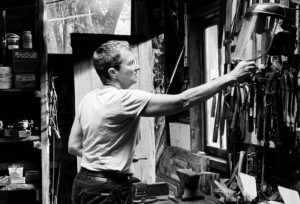 Alison in the workshop at Melaleuca. Photo: Glenn Buterworth 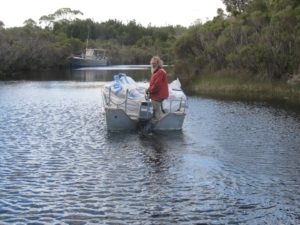