Wildcare Friends of Melaleuca – fish oiling, drain digging, brush cutting and weeding as far away, the world starts to change 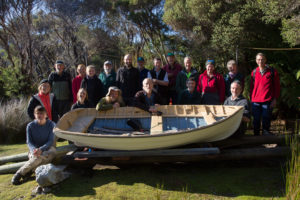 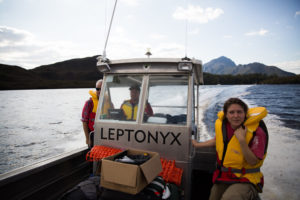 As the world began to change and news of an escalating coronavirus crisis began to reach Australian shores, 17 volunteers were selected for their superior intelligence, wit and fish-oiling skills to bunker down in the remote southwestern tip of Tasmania’s Wilderness World Heritage Area — not for the preservation of the human race, just for the 2020 Friends of Melaleuca Working Bee.

Between 11 and 18 March, this group of assorted volunteers, boaties and rangers gathered in Melaleuca, a world away from phone reception, 24-hour news cycles and foot-tap greetings, and undertook one of the biggest working bees to date. “Those who drink the buttongrass water always come back,” so goes one of Deny King’s favourite sayings, and this proved true for the 2020 volunteer group. Comprised of old hands and eight new recruits, the volunteers were excited to return to Melaleuca and contribute to caring for this special place. If they were seeking isolation, however, they were mistaken — Melaleuca was a hive of activity with bushwalkers, day visitors, yachties, Orange-Bellied Parrot monitoring volunteers and Parks and Wildlife volunteer caretakers. 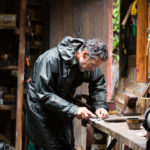 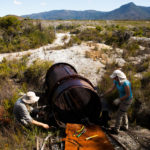 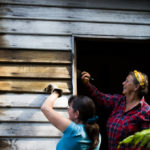 Janet and Geoff set the agenda for the week, and on top of the routine brushcutting, fish-oiling, drain-digging and weeding jobs, there were a few projects to get stuck into at the Deny King Heritage Museum, the Bushwalkers Huts, Clayton’s Corner, the Red Shed and the King’s house. The weather had other plans, however, and made 38mm of rain the top priority for Day 2. This allowed plenty of time for planning, discussion and cuppas at the King’s and plenty of water for David’s drain hydrology investigations at Barbara Willson’s house. The next day, with an eagle eye on the weather, expert roofing team Archie, Geoff and David got to work trialling roof replacement at the King’s. Barbara generously accommodated the whole team at her house for dinners thereafter – at one stage hosting 25 visitors!

The Deny King Heritage Museum got plenty of attention this year, from both visitors and volunteers. Mel, Melissa, Hunter and Ian put in the hard yards installing new window trim, painting, updating exhibits and installing displays. Meanwhile, the Bushwalkers Huts got an upgrade with a lick of paint and a new top for the tank. Pip made hay while the sun shone and gave the buttongrass surrounding the huts a sharp haircut with the brushcutter. Rik, Mitch and Andrew, the resident sparkies, set about testing and tagging anything that could hold a volt and installed new LED lighting and inverters. The true story of the restoration of the Moth Creek Derrick is worthy of a dramatic adaptation, and we look forward to finding out which Hollywood stars will play DR, Chris, Georgie, Ash and Andy. 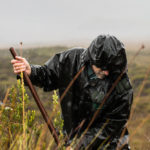 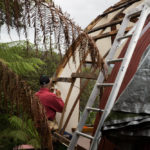 Headed up by ringleader Rob, an enthusiastic team of volunteers made their daily commute to Clayton’s Corner aboard Leptonyx, the PWS boat skippered by ranger Chris. The order of the day (and the next day, and the day after that, and the day after that..) was replacing the tank stands, a monumental task only made possible with the help of Bob’s coffee machine. Other jobs at Clayton’s included treating and staining the indoor ply panels, fitting a handrail, fertilising Win’s lilies, reining in the watsonia and rhododendrons and pulling out those pesky native ferns growing amongst the dianellas.

A huge week was wrapped up with Chris sparking up the legendary Southern Cross engine, and plans were made for 2021 with a couple of well-earned whiskies under Janet and Geoff’s brand new roof. Thanks to all the vollies involved, as well as Andy with his camera, rangers Ian, Chris and Alan, OBP monitoring vollies Rachael and Griff and PWS caretakers David and Di. A huge thanks to Janet and Geoff, Barbara, PWS and the yachts Juliet, Juliene and Georges Bay for their hospitality! 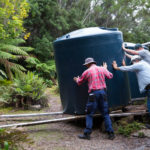 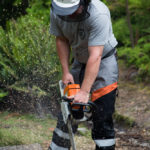 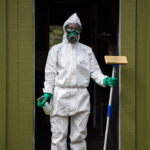 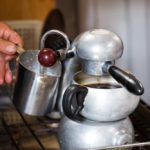