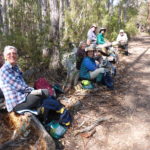 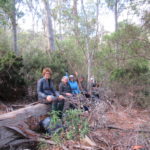 Our long established programs of control/eradication continue with a notable and progressive decrease in the incidence of Broom and Spanish heath. Long term volunteers rotate through the various working bees (4-5 per year) with a welcome regular addition of new members.

Systematic monitoring and clearing of regrowth continues over the 300 recorded sites on Skipping Ridge and in Bernacchis Valley. Each site is rechecked within 2 years with an increasing number of sites showing no weeds over an extending period. Consequently we are able to check sites more quickly and concentrate on the remaining ‘hotspots’. Bernacchis Creek with its dense vegetation and damp soils promotes rapid growth but plants only become evident when they show and flower above the bracken; last spring (September) was the first time since 2005 that no flowering plants were found here.

Haunted Bay. This remote 7 hectare forested site is checked every 2 years. In April 2019 4 volunteers camped at Robeys farm and the next day walked the rough 3km to the site.

Since the 2008 primary control, there has been prolific growth of natives with associated ground litter; which has undoubtedly suppressed regrowth. Areas where germination had occurred since 2008 were checked but no weeds were found there, or on transects through the area. Perhaps it is too soon to declare ‘eradication’ but we are not far off!

Robey’s Creek site. This 2 hectare infestation has been cleared annually since 2009. Eradication has been slow with germination persisting in a small area. In previous years monitoring has been done in spring but we now realise that autumn is a more appropriate time. The open, north facing slope is covered in Swordsedge, Kunzea ambigua and Acacia species. In March, 4 of us spent 3 hours clearing small seedlings which were mostly hidden under the above plants. At this stage of growth the use of a screwdriver for levering out plants is very effective and minimises soil disturbance.

Our workload has been eased considerably by recently joined members taking over this aspect of our commitments. In March, from a camp at French’s farm a sweep of Riedle beach found 75 plants, with 5 flowering. The following day in the Bloodstone Pt/Pt Lesueur area, 95 plants were removed with 25 flowering (all flowers removed and bagged up). The number of flowering plants located is indicative of the very fast growth rate and maturation in this environment; overall plant numbers have reduced.

During this work, African daisy (Osteospermum fruiticosum) is also monitored along this section of coast. Only small seedlings were found and removed from the main site near Bloodstone Pt. Another infestation to the north of Return Pt. is yet to be treated.

This plant has been described as ‘one of the worlds’ worst agricultural weeds’; it can contaminate grain and is highly toxic to animals. It was discovered at Darlington in 2009 by some volunteers. The site is marked and monitored, although some seeding has occurred since. The plant can germinate and produce seed quickly over summer. In late March 2020 a Ranger found another plant behind the Mess Hall which had commenced seeding! The significance is perhaps not only for the island, but more for the possibility that seed may be transmitted on footwear to agricultural areas in mainland Tasmania.

On a historical note, the Poppy was last recorded in the 1940’s in Hobart. A poster for identification is on display in the Parks Office.

David Reynolds plans to carry out renovations at French’s Farm and other weeding work around Darlington subject, as with all our upcoming work, to a resolution of the current Covid19 crisis. Spring is a critical time for some our programmes and we are developing a priority list in case there are limitations on our participation.

Our thanks to Parks for accommodation and with help in transporting us and our gear to remote sites.