Weeding Broom and Sea Spurge on Maria Is. Nov. 2018 by Anne and Peter Booth 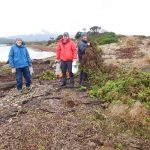 On our latest working bee in November we welcomed two ‘first-timers’ to our group, although it transpired that many years ago they had done research work on the island’s Native-hens and consequently provided a different perspective. Welcome back!

On this trip our customary enthusiasm was put to the test by the weather – it was consistently wet. Our planned trip to the upper Bernacchis Valley was not possible because of the high water levels in the creek, but despite this we continued a working schedule on the Broom, with the exception of one day when a torrential downpour precipitated an early retreat. A subsidiary survey of Sea Spurge at Riedle Bay found minimal infestation with the exception of an isolated location in bracken, where a previously undetected seeding plant had been removed in March. As anticipated there was dense germination here with 200 seedlings cleared; this will be a ‘hot-spot’ for some time to come. In response to a request from CSRIO, samples of sea spurge were collected as part of a nation-wide survey for population genetic analysis; this complements samples previously collected at Point Lesueur. 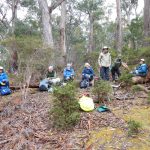 Over the 12 month period we held three ‘standard’ working bees on the broom, this year supplemented by three ‘mini’ bees dictated by specific requirements (2 or 3 participants).

We experienced mixed weather on the minor trips and, on one occasion, ferry cancellations due to wild weather resulting in an unplanned additional two days on the island – we survived! The September working bee included the annual check of Spanish Heath at Robey’s Farm, small seedlings and a few flowering plants reinforced the necessity for these regular annual checks. In December David Reynolds, in the course of a camp at Return Point to control Mignonette and other weeds, arranged to check regrowth of Sea Spurge at Point Lesueur, finding a further 220 plants.