Patron of Volunteering Tasmania, Her Excellency, Professor the Honourable Kate Warner, AC, Governor of Tasmania presented the official Awards at a special ceremony at Government House.

These volunteers stood out from the 220 Tasmanian’s nominated for their service this year.

Here is a picture of Anne and Peter after the ceremony and what the judges said. 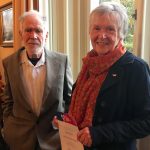 “Anne and Peter Booth have led a successful weed-eradication program on Maria Island for 14 years. As Friends of Maria Island ‘Sweeping the Broom’ program, they have co-ordinated over 50 volunteer working bees, to hand-pull millions of weeds that threaten the National Park’s heritage and natural values.

Anne and Peter are a powerful pair of quiet, committed, community leaders. They not only have a vision, they have an effective strategy to make it happen. For example, they developed a detailed ‘colour coding’ mapping system to systematically tackle the weeds. The Booth’s initial weed containment objective has since expanded to eradication from huge areas.

Anne and Peter have been responsible for planning, liaison with the parks service, coordinating transport on and off the island, writing reports, applying for grants, lobbying, and updating vegetation maps and the Atlas of Living Australia.

Their ability to marshall resources, train and energise the volunteer teams, and work with Parks and other organisations is truly an inspiration and shows what can be achieved with passion and commitment.” 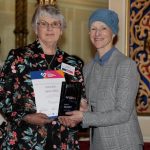 Shirley Baker is a volunteer lighthouse caretaker, fundraiser, historian and treasurer with the Friends of Deal Island (FoDI) – a group dedicated to protecting and conserving Deal Island and Kent Group National Park. She has been a dedicated member of the groups since 2002

Shirley has contributed immeasurably to preserving the cultural and natural history of the Island and Kent Group National Park. She has been secured several Arts Tasmania grants to support this work and has lead the development of a collections project, an interpretation project, and multiple information banners so that visitors can learn the rich stories of the Island and its lighthouse.

Shirley initiated the restoration of the original superintendent’s cottage (1846), which is now recognised as a small museum. She has even produced the Lighthouse Cookbook, and sales of the book have raised considerable funds for both FoDI and Friends of Tasman Island.

Shirley’s talent as a historian and her reliability, initiative and knowledge have contributed immensely to building Tasmania’s historical archives.