Background: In August 2014 Wildcare ‘Friends of Bruny Island Quarantine Station’ held an Oberhausen Day at the quarantine station to commemorate the arrest of the Oberhausen officers and crew at the beginning of WW1. During 2014 it was thought it would be good if we could connect with any descendants of the Germans onboard the Oberhausen. So, Kathy did an email interview with GeschiMag – an online German magazine.

The entire interview can be read by clicking on the link below or by copying and pasting into your browser:
https://geschimagazin.wordpress.com/2014/04/14/in-the-wrong-place-at-the-wrong-time/

Two years later in 2016 after reading the article, Roswitha Muller, granddaughter of the 4th Officer Fritz Stegherr contacted Kathy with an offer of one of five diaries her grandfather kept during his time in POW camps in Australia 1914-1919. This was duly posted out from Germany and (a facsimile) is on display in a glass cabinet in the Visitor Centre on site. It is written in olde` German so many Germans cannot read it. A few years later Doro Forsck offered to translate it for us. Doro actually visited Germany one Christmas and met Roswitha and they translated a few pages together. Due to work commitments after completing many pages, Doro was not able to continue. 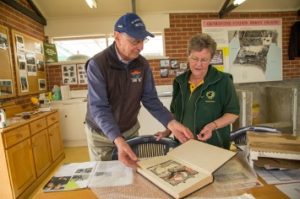 Paul Thost & Kathy Duncombe at Visitor Centre – looking at the original diaryKathy later was told of a German gentleman – Paul Thost, who did a bit of translating for the Anglesea Barracks and National Archives of Australia. On Thursday 5th November, Paul’s son Douglas brought him to the quarantine station to see where the German crew were interned. They had morning tea and lunch with Kathy and volunteer caretakers John & Gaynor Cherry, and then had a tour of the site including the Visitor Centre where he was able to see the original diary. It was wonderful to have Paul on site and for him to visit the buildings described in the diary he is translating.

Eventually, it is hoped to publish the translation which will give readers an insight to the life of German internees in Tasmania.