Congratulations to Friends of Bass Strait Islands (FOBSI) for winning the Coastcare Award (at the Landcare Awards ceremony held last weekend) and to President, Karen Ziegler who received an honorary mention in the Australian Government Individual Landcarer Awards.

FOBSI’s tireless habitat restoration work on the Bass Strait Islands is truly inspiring – and weed control is not the only outcome! 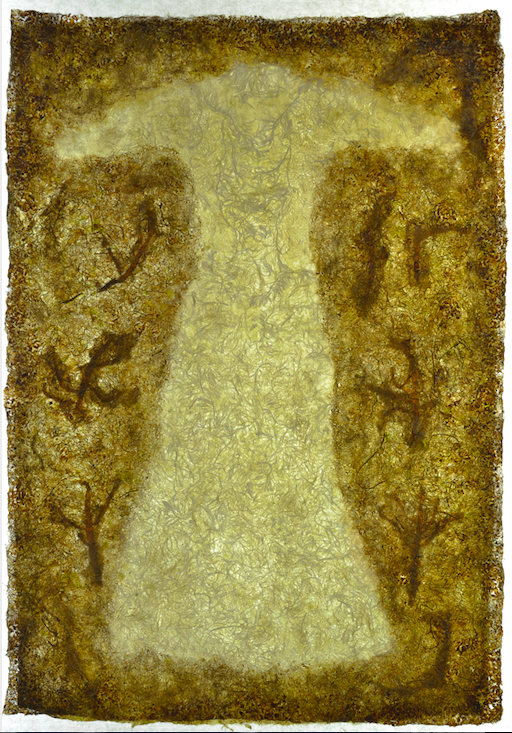 FOBSI volunteer and artist, Catherine Stringer, writes below about her recent work which was inspired by her stay on Flinders Island during the May FOBSI Working Bee. We believe this puts FOBSI at the cutting edge of nurturing artistic expression while controlling boxthorn and mirror bush!

“I was fortunate to have the opportunity to participate in my second FOBSI working bee in May this year. My artwork ‘Apparition’ which was inspired by this trip.

Our team camped for the fortnight on Flinders Island at Emita, which is not far from Settlement Point and the former Aboriginal settlement of Wybalenna. Wybalenna was established in 1834 to house the Tasmanian Aborigines who had been rounded up in George Augustus Robinson’s ‘Friendly Mission’. The intention was to ‘Civilise and Christianise’ the Aborigines.

European diseases, poor living conditions and homesickness decimated the Wybalenna population. The settlement closed in 1847 and the 46 remaining survivors moved to Oyster Cove in Southern Tasmania.

Today, little remains of Wybalenna. The chapel has been restored, its eerie presence in the windswept pastures a monument to the tragic past. Nearby is a lonely graveyard which holds the unmarked graves of the Aboriginal victims. The area felt haunted by the ghosts of these Aborigines.

‘Apparition’ is made from 2 superimposed sheets of paper, with LED backlighting. The paper was created from seaweeds and seagrass gathered from the beaches around Settlement Point. The white dress, traditionally worn at Christian sacraments of Baptism, First Communion and weddings to represent purity and innocence, here symbolises the betrayal by false hopes and promises, behind which the Aboriginal identity was lost and broken.”

‘Apparition’ is currently on show at the Old Kempton Distillery, along with other of Catherine’s recent seaweed paper artworks. It is open daily from 10-4 until October 17.