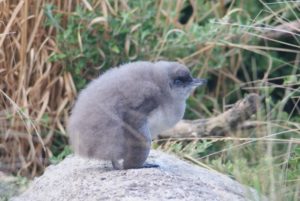 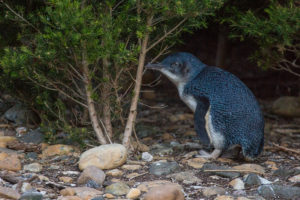 Did you know that parent penguins carry food back to their chicks in their gut, because if it was in their beak they would lose their balance? And that the divorce rate amongst penguin couples is 18-50% and faithful pairs produce up to three times as many chicks as birds that don’t stay together? Apart from the divorce rate, humans are a major threat to Little Penguins and the Friends of Lillico Penguins (FoLP) are doing everything they can to protect the Little Penguin breeding colony at the Lillico Conservation Area near Devonport. The colony is made up of about 1500 breeding pairs with 50-80 living near the viewing platform.

Throughout the penguins’ breeding season, from late September to early the following April, FoLP work closely with the Parks & Wildlife Service to supervise the visitors to the Penguin viewing platform. 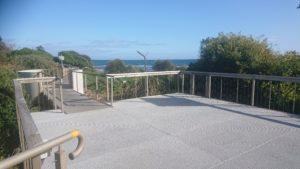 A big part of their work is training volunteers who provide a free guiding and interpretation service through talks, question and answer sessions as well as recording counts of visitors and wildlife.

With the penguin breeding season upon us, we are currently raising funds to support Little Penguins – if you would like to contribute to this cause you can make a tax deductible donation here.

Some of the most frequently asked questions are outlined below (along with the answers):

Q: Where do they go in the off-season? A: Little Penguins spend 80% of their time out at sea. During winter, when they don’t have chicks to feed, they can spend up to a month at sea without returning to land.

Q: How far do they swim per day? A: During breeding season, they usually feed within 8-15km of the colony. During winter, they can travel up to 700km. They travel from 15 to 50 kilometres a day, but that includes diving up and down as they look for fish.

Q: How long can they hold their breath? A: Longest recorded dive 1 min 56 secs.

Q: How deep do they dive? A: On average they dive between 5 and 20 metres. Deepest recorded dive 72 metres.

Q: How fast can penguins swim? A: On average they can swim 2-4km/hr but they have been recorded swimming at 6.4km/hr.

Q: What do they eat? A: Small fish (eg pilchards, anchovies), squid, small octopi, krill, seahorses. They eat about 250g of food a day, which is a quarter of their body weight.

Q: Do penguins need to drink fresh water? A: No. They have a gland above their eyes which filters salt from seawater, leaving them with fresh water in their bodies.

Q: How long do they live? A: If they survive their first 2 years, then their average life span is 6-7 years. Oldest recorded on Phillip Island was 25 years 8 months.

Q: How many eggs do they lay? A: Two, a few days apart. They are about the same size as hens’ eggs.

Q: What is the incubation period? A: Around 33 days.

Q: Do both parents look after the chicks? A: Yes. They share incubation and feeding. 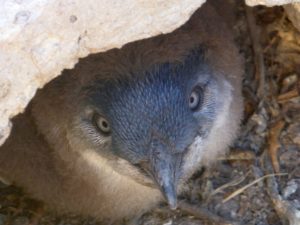 Q: How do you tell the difference between the sexes? A: With difficulty, but by their beaks. Adult females have a thinner beak than males. Males have a distinct hook on the end of their beak.

Q: How do they sleep at sea? A: Whether at sea or on land, they lie on their bellies with their heads up. They have numerous ‘catnaps’ during the day and night, for only 4 minutes at a time. They only have 12 second periods of deep REM sleep (for humans, it’s 20 minutes).

Q: Why do you use red torches and not white? A: Deep red light is much gentler on the penguins’ eyes than white and doesn’t interfere with their night vision – although we still try to avoid shining the torch in their faces.

Q: Do they prefer man-made or natural burrows? A: They seem happy to use any suitable site that’s going –it’s easier for them to use the man-made burrows, but alot do their own thing under the bushes and platform as well. 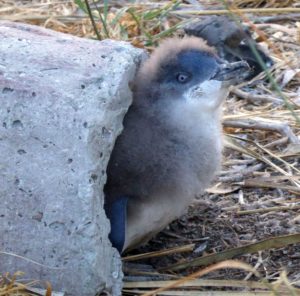 Q: Do they return to the same nest each year? A: We don’t think so. It seems to be first in, best accommodated.

Q: Why do penguins moult and how long does it take? A: Adult penguins moult and grow new feathers every year. They depend upon healthy feathers to keep them warm and waterproof while at sea. While moulting, the penguins lose their waterproofing, so they cannot go into the water. Moulting takes about 17 days, so in that time, the penguins cannot feed – they have to depend on body fat. Before they moult, they eat as much as possible, so that they almost double their body weight.

Q: If you find a sick or injured penguin, do you care for them? A: We try to keep interference to a minimum. However, if we think a bird can be saved, there is a dedicated Penguin Rehabilitation and Release facility in Burnie.