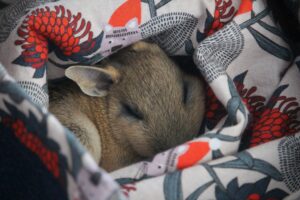 Meet Poppy – an Eastern Barred Bandicoot who was brought to Bonorong Wildlife Sanctuary after she was attacked by a dog and unfortunately orphaned as a result. Poppy had to undergo a round of antibiotics to combat any potential infections from the attack but she’s looking to make a full recovery. Once she is old enough, she will be released back into the wild – something that is only possible through the care and attention of wildlife rehabilitators like Emmalene Maher (Poppy’s carer) who reflects;

“Being a wildlife rehabilitator can be a very demanding role in both a time and monetary sense. Often times, an animal comes into care in a bad way, whether they’re injured, sick, or orphaned and it’s your role as a carer to help them through the healing process, which can be very emotionally taxing on both yourself and the animal. When everything goes right and you’re able to release them back into the wild, the sense of pride in the animal and their fight to pull through as well as the knowledge that you gave them a chance that they otherwise wouldn’t have had, is an indescribable feeling. Being a wildlife rehabilitator is a privilege that I’m grateful to have.”

Interested in becoming a wildlife rehabilitator? Find out more at this link.