Tidying up by the Tyenna River

In June, the Friend of Mt Field saw a dense patch of blackberries on the bank of the Tyenna River. It was our first task for the day on our July working bee, but it proved to be a bigger one than anticipated. Being close to the river, spraying was undesirable, so we tackled it with loppers and mattocks. Some broom and other weeds were also removed from nearby. By the time this was finished it was lunchtime. 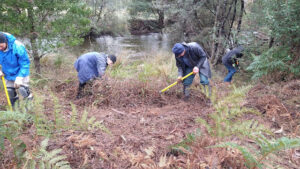 Clearing blackberries by the Tyenna River 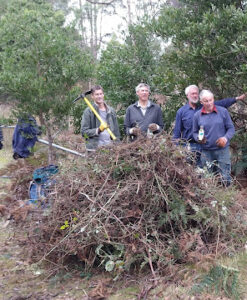 Blackberry removed from the banks of the Tyenna River, and some of the removers – Ross, Stephen, Howard and Greg

We spent the afternoon near the Tyenna River above the weir taking tree guards from around trees and bushes that had grown well above the guards. Some guards were quite difficult to get over the top of trees.