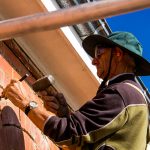 I’m on the way to Tasman
I get picked up on the way
I would have taken my own car
But they have no parking bay.

Up in this chopper
An exciting time to be
Across the ridge
And there before me
A lighthouse is what I see.

I’m off on an adventure
To do what, I’m not sure
I’m camping with 10 others
I’ve never seen before. 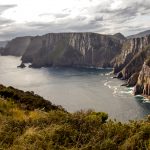 In these first few verses of a poem by FoTI volunteer, Mike Manning, he speculates about volunteering for the first time in a remote location for 10 days with people he’d never met before. It seemed, to him, a slightly daunting prospect, but he soon found that Tasman’s spell leaves its mark and 10 days wasn’t nearly long enough!

A bricklayer by trade, Mike joined ten other volunteers for FoTI’s 29th working bee on Tasman Island in November 2018. While the main job on the works programme was eradication of the Californian Thistle, it was hoped to get the march on restoration work on Lightkeepers’ Quarters No 3, planned for April next year.

Day 1 saw everyone arrive safely on Tasman Island, thanks to Osborne Aviation. As well as the works team, there were three sling loads of food supplies, personal gear, building materials, a tank and, thanks to PWS, a new ride-on mower. “What chance does a lawn mower have of flying?” asked Brett. “Similar to a pig!” was the reply as the mower flew over from Cape Pillar, dangling in midair, beneath the helicopter! Down on the ground, the mower was soon officially launched, the tape being cut by Volunteer Co-ordinator, Pip Gowen, who had hitched a ride for the day. 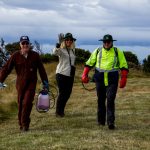 Researchers, Elizabeth Znidersic (Charles Sturt University) and Michael Towsey (Queensland University of Technology) were also spending a few hours on the island. Their ongoing study of the Lewins Rail, birds which live permanently on Tasman Island, was to be enhanced by two sound monitors. These would record bird calls and be removed and returned at the end of the working bee. The works programme commenced in earnest on Day 2 and over the next week, volunteers ticked off jobs, one by one.

Mowing the grass after an absence of about 6 months is always a huge task but with the new ride-on mower, Geoff found it a cinch. After mowing the tracks and the lightstation precinct, the brushcutter was pressed into service to finish the job. 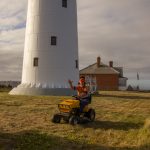 Bill and Brett kitted up to attempt eradication of the Californian Thistle. Over the 10 days, Jo reckoned that “the thistles were given hell“ – counting as they sprayed – “4000 so far and not finished yet!”, they said. Other weeds were also in their sights – Jo and Amanda went on a search and destroy mission for other invasive species, a programme of eradication which has been ongoing since 2009. Work was recorded on Wildcare’s Fulcrum GPS Ipads and, camera at the ready, Amanda recorded work in progress. 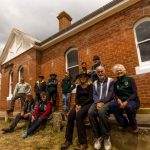 The arched windows of the Federation-style brick lightkeepers’ quarters incorporated steel lintels which had rusted, expanding and cracking the brickwork. Add to that the fretting of a number of other bricks over time meant there was a lot of repair work to do. Mike was in his element. Protecting the glass window panes with a plywood shield (made by Dave) Mike was soon able to remove the rusted lintels and repair brickwork around all the windows in Quarters 3, the Assistant’s Quarters next to the lighthouse. This has now set the scene for the April 2019 working bee when FoTI plans to restore the verandah on this house.

Dampness seeping through the foundations had caused rot in the flooring at Quarters 2. Dave (a heritage builder), Mark and Ron set to work on replacement, using timber sourced from McKay’s Timber. Amanda caught all the action on camera and, before the final floor-board was nailed down, a time capsule with present day objects and a description of FoTI’s work, was placed in the cavity. 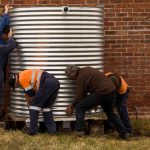 Working bees on Tasman are considerably enhanced having by a dedicated volunteer Cook/Chef at Hooters Tasman Island restaurant. Glenda, who spent much of her time in the kitchen, cooked up storm with sumptuous morning and afternoon teas, lunch and evening meals. She was ably assisted by other members of the group from time to time, some of whom also cooked delicious desserts. Thanks to Glenda, Hooters has a 5-star reputation!

Works co-ordinator, Chris, was here, there and everywhere, and as our poet, Mike says,
Our leader’s name is Chris
An Islander, no doubt
He goes about his work so cool
He has no need to shout.

Apart from overall supervision of works in progress, Chris worked in the Oil Store, replacing the tie-downs which stop the roof blowing off in Tasman’s windy weather. And there was a new tank to install, replacing one which had been replaced back in 2009 and had already rusted through. Modern corrugated galvanized iron isn’t what it used to be!

But it wasn’t all work and no play. Walks along the island’s eastern cliffs were rewarded by the sight of whales heading south to their summer feeding grounds and sunlight filtered through the sheoak groves as the group walked through the ‘secret garden’ to the western side of the island. The breathtaking views cast Tasman’s spell as the banshee screeches of Yellow-tailed Black cockatoos, feasting on succulent Banksia flower spikes, echoed across the island. 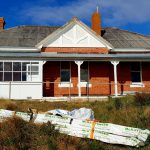 Thanks must go to McKay Timbers for the good deal on the load of flooring timber; to PWS for the ride-on mower and assistance with helicopter marshalling; Wildcare for an Internal Grant to allay helicopter costs and of course, a big thank you to all the volunteers for jobs well done.

All too soon it was time to leave Tasman. As the final day dawned, a spectacular view greeted Ron as he looked out his bedroom window. What “a privilege to come on a working bee on Tasman Island”, he thought. “One of the greatest aspects of the working bee”, he mused, is “… working alongside such a diverse range of fellow human beings.” He remembered the mealtimes, packed full of stories, jokes and laughter, the projects achieved and the many acquaintances who have now become friends. “We are all here doing our bit to enhance the heritage and the natural beauty of the island. We give our time and skills to preserve the efforts of those who have come before us and hopefully leave something for those who follow.”

These thoughts are echoed in the final two verses of Mike Manning’s poem.

I thought 10 days might be too much
But as each day goes by
I’m thinking, perhaps Heaven is
Not only in the sky.

Now my stay is almost over
And coming to an end
A little time on this fair isle
I highly recommend.