A Tale of Seafarers, Founders & Other Passionate People 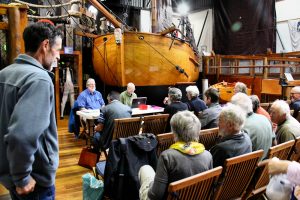 their sloop the Norfolk, the first Europeans to do so, on their circumnavigation of Tasmania from Sydney. Some 220 years later, on Saturday, 24 March 2018, Wildcare Inc. held its 20th year Annual General Meeting at the Bass and Flinders Centre in George Town, under the watchful eye of the replica Norfolk.

Just prior to the AGM a short special general meeting was held to allow the Wildcare membership to make decisions on three proposed changes to the Constitution. The results of this process are here. 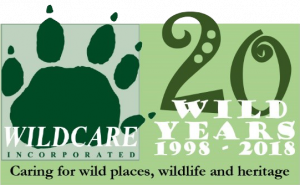 In his annual report, Appointed Co-Chair Andrew Smith, reflected on the growth of the organisation during the 20 years since he founded Wildcare. Major achievements include reaching 7000 members, the formation of 80 branches that are active within their own special areas of interest throughout the State, the half a million hours of contributed voluntary project work each year, the millions of dollars raised that have been used for environmental projects and the very effective partnership with the Parks & Wildlife Service. Elected Co-Chair Peter Williams responded by emphasising the critical role that Andrew has had in leading the organisation throughout this extensive period.

During the 2017-18 year there have been several changes in personnel in key Wildcare roles. Suzanne Crowley stepped down as Board Secretary and was replaced by Glen Hayhurst; Jamie Bayly-Stark resigned as Chair of the Gift Fund Committee and was replaced by Bob Tyson in a temporary arrangement; Carol Pacey retired from the role as Bookkeeper; Facilitator Jodie Epper left to volunteer in Indonesia, her role being filled by Kim Willing; Robert Dyson resigned as Board Treasurer as did Lindie Lupo as Finance Officer. Additionally, three Board Members: John Duggin, Sally Salier and Dave Harris, completed their term on the Board but decided not to stand for re-election. We thank all those people who have departed their positions for their important contribution to Wildcare. 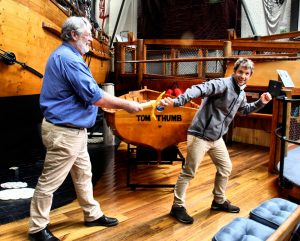 The most significant news from the AGM, however, was the announcement by Andrew Smith of his intention to resign as Appointed Co-Chair as a result of his upcoming retirement from the State Service to pursue other business interests. After thanking Andrew for his enormous contribution to Wildcare, Jen Fry, Manager, Visitor Strategy, PWS, announced that Andrew’s replacement as Appointed Co-Chair would be Sam Cuff. Sam has been involved in community engagement with PWS over the past 12 years.

Joining Sam as a new member of the Board is Adrian Sullivan who is also currently Secretary of Friends of Freycinet. We welcome both Sam and Adrian to the Wildcare Board, the new composition of which is shown here. 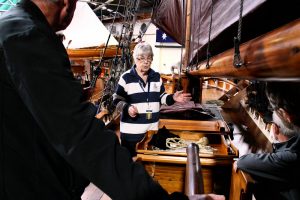 On board the Norfolk with Ivy

With the formal meeting stuff over, Bass and Flinders Centre volunteer, Ivy, gave a really interesting and enthusiastic talk about the exploits of Bass and Flinders and how the Centre came into being. Then attendees were given the opportunity to tour the many exhibits, including exploring below decks on the Norfolk. This was followed by an absolutely stunning lunch provided by head caterer Angela and her team.

After lunch some people chose to visit the Low Head Pilot Station Maritime Museum while others challenged the rain clouds by taking a short walk along the George Town foreshore.

Overall, this was a great opportunity for the 23 passionate Wildcare members present to catch up with each other and swap stories of how they are caring for our wild places, wildlife and cultural heritage…

All of the excellent photos are by Erika Shankley.