Introduction
Gambusia (Gambusia holbrooki) was introduced throughout the pan-tropics of the world as part of many international malaria control programs, ostensibly as it was considered to eat mosquito larvae, the adults of which are carriers of the disease. It was introduced to mainland Australia in 1925 and quickly became well established in many freshwater ecosystems. Gambusia was first reported in Tasmania in 1993 when released into a farm dam in close proximity to the Tamar River in northern Tasmania. It was eradicated from the dam by responsible agencies but later found in the Tamar Island Wetlands in 2000 and positively identified as Gambusia holbrooki. A new incursion further upstream was reported in 2018 (Figure 1). 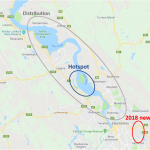 Volunteers at the Wetland Centre (among other groups and government agencies) were concerned about the presence of Gambusia and the potential impact on native fauna, particularly the threatened frog, the Green and Golden Frog (listed as vulnerable in both the state and nationally), as well as its impact on aquatic invertebrates and native fish. Gambusia competes voraciously with native species for food, simply by its vast numbers, and also nips fins of larger fish and tails of tadpoles rendering them less likely to survive to adulthood.

Initiation of Control Programs
In early 2003 the Tamar Island Wetlands Volunteer Group along with the steering committee involvement were successful in applying for funding from The Australian Government Priority Actions Program for Invasive Species to employ a part-time position to initiate control and educational programs for Gambusia. Control centred on reducing population numbers in wetland channels mainly through dip netting and euthanasia (Figure 2), eradicating outlier populations wherever practical and mapping the distribution of other populations in the Tamar Valley (Figure 1). 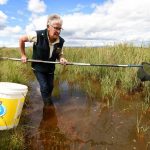 The education programs emphasised increasing community awareness and the importance of getting rid of the species from the wetlands in particular and Tasmania overall. Subsequent grants were obtained by Tamar NRM and then NRM North to continue and expand the programs from 2006-07. The control programs included the evaluation of different netting and trapping techniques as well as habitat modification to make channels less conducive to Gambusia, while the education and awareness programs were renewed and included school group activities. Tamar Island Wetland Volunteers as well as another group of Gambusia Volunteers from NRM North were involved in emptying traps, sexing and counting fish numbers, counting and returning native fish when caught, and maintaining traps and lights used to attract gambusia into the traps. Trapping was initially effective with reduced population numbers evident during the first summer in 2008-09 but thereafter they lost their effectiveness and ultimately became ineffective altogether. Future funding for the program was unsuccessful and the project was unfortunately terminated.

As part of the initial control programs Tamar Island Wetland Volunteers undertook routine sweep-netting sampling for population assessments and dip-netting for eradication purposes. Population monitoring has continued on a weekly basis since February 2007 to give over 12 years of data (Figure 3). Population peaks towards the end of the breeding season from early autumn (February) to early winter (June) while lows occur from winter to early summer. The population sampling shows that there is a general trend in increasing numbers and seasonal distribution over the 12-year period, suggesting both increased acclimation and risk of spread.

In the wetlands the preferred habitat of Gambusia is shallow, slow-moving water, and warmer and sunny sites where there is floating and submerged vegetation. When disturbed or frightened Gambusia dart into deeper water or where emergent vegetation is present for protection and where they are difficult to see (see Figure 2 for example).
Although with an equal sex ratio at birth, females tend to dominate in catches from the wild population throughout the year and at the height of the breeding season the sex ratio is in the range of 2-3 females for each male, and sometimes higher (Figure 4).

The Current Research Program
With the lack of success using standard techniques for population control, a research program was established by UTas in collaboration with Inland Fisheries Service Tasmania, NRM North and community volunteers at the Tamar Island Wetlands, with three years funding from Australian Research Council to develop “Trojan Y”, a genetic approach to manipulate sex ratios so that successive generations become almost entirely female, thus reducing reproduction and continuity of the population.

The UTAs study has demonstrated that sex reversal of this species in both directions is feasible using hormones (i.e. male to females and females to males), an aspect central to developing the Trojan control approach.

The study also used historical and current capture data to estimate the population size (carrying capacity) at the wetlands. An estimated mean carrying capacity of over million fish (about 86 kg) explains why the early physical control methods with a maximum removal rate of just over 4kg/annum were unsuccessful.

Somewhat unexpectedly and contrary to previous knowledge, the study has shown that, just like in birds, female Gambusia determine the sex (ZZ/WZ system) of offspring as opposed to males in mammals (XX/XY system). This new knowledge requires a change in control strategy from one of Trojan Y to Trojan W (Figures 5a & 5b), so that successive generations become almost entirely male but, still reducing reproduction and continuity of population. The Trojan approach does not involve genetic change/modification or cause mass killing of fish. Critically, it is ecologically harmless, effective at large scale, species-specific, has wide community support and economically feasible.

The recent (2018) new incursions of Gambusia in the North Esk River (Figure 1), highlight the risk of its spread to other location as most Tasmanian freshwater and estuarine ecosystems are considered to have suitable habitat for Gambusia to thrive.

Conclusion
The current research has demonstrated great promise and could be scaled up to field experimentation. However, it requires further controlled laboratory studies, tank tests and environmental assessment that are beyond the current project. This and broader national applications are being explored.