A few days in the life of a Freycinet volunteer.

The 3-4 hour drive to Coles Bay is always pleasant and there are great wineries on the way for those extra supplies.

An extra day is spent travelling, doing the paperwork and having a briefing by Fiona (who also supplied morning tea, thanks Fee!), issuing gear, and settling into our PWS staff quarters for the night. And, we went to the pub for our mandatory meal.  Do not order pasta or cous cous for heaven’s sake! 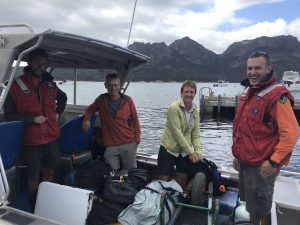 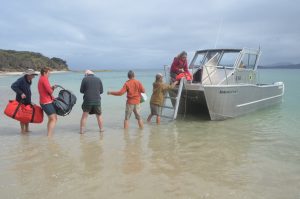 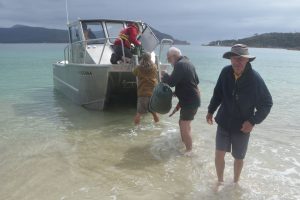 It takes a while to set up base around Morey’s Huts what with the caretakers and working bee stuff, not to mention ours as well.

After that there was a walk around the main gorse and periwinkle (vinca) sites to see what was in store for us.  It looked like we would not run out of work unfortunately.  The vinca was still abundant.  The boss will have to go back to the drawing board.  He was told not to keep spraying it with that same stuff!

The work days involved creating a defense line against the Flinders Island Spotted Fever bearing tick.  Insect repellent, insect repellent overalls, and some confidence, nah, I won’t get it. 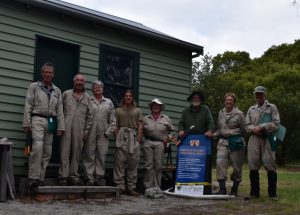 Then for the next few days it was pulling or cut and pasting 15,000 gorse plants, hand plucking periwinkle and bagging it to take of the island, and finding the only sea spurge plant and the only 6 Paterson’s Curse plants on the island.

It did rain for a day or two which made the waterfall fall beautifully and made those natural stone bathtubs a treat to lie in!

Some recreational walks were undertaken of course and some rubbish picked up. There was also time to repair a stove, indulge in the odd (very) happy hour, lots of banter and bulldust,(well, we did have a large Launcestonian contingent) and do other things we will not go into.

Despite the tedious weeding, Schouten is a magical place that we all want to keep returning to.

Retiring President of the Friends of Freycinet