You be the judge.

There were ten participants who had been on too many working bees together and generated a lot of nonsense.

We had a fairly rowdy dinner at the pub to start with.

Getting to the island involved us and three boatloads of gear utilizing both the PWS boat and the Aqua Taxi courtesy of Sue and Nathan (thanks guys). Getting gear off the PWS boat was a bit tricky in the conditions as all the summer caretakers’ stuff was on that, and in the process two old codgers lost their footing and were dunked, much to everyone’s amusement. It was their own fault of course.

What about the work? Yes, we did that too. 12 750 gorse plants eradicated including a remote patch of 15 trees (!) at the end of a tiring day. Oh, for a small battery powered chainsaw. One small patch near the beach had two idiots competing to find plants after each one had ‘definitely cleared it’.

Two hardy souls went across the island to Sarah Ann Bay and found large gorse bushes which were dealt with.

The blue periwinkle was sprayed again and only needed 15 ten litre loads. Are we nearly there yet?

We also had King Canute there trying to hold back the sea near the steps with lots of rocks.
Did I tell you about the bloke who had to catch the boat back and get his car keys? Never mind.
Three participants stayed on for part of the last day to help Shannon from PWS put the final touches to the new Morey’s Bay volunteers toilet.

All in all a successful working bee. 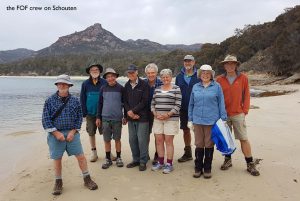 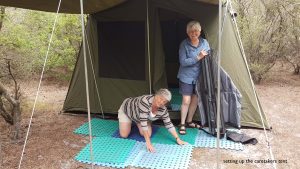 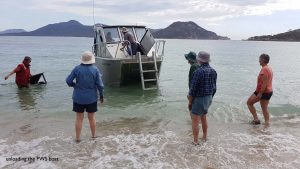 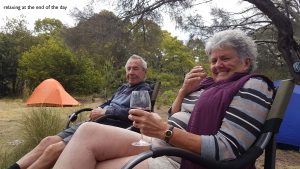 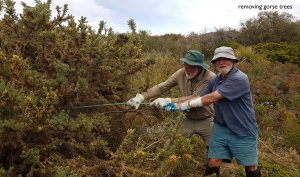 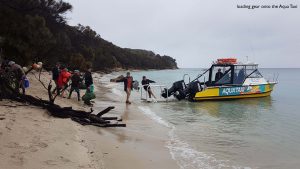