Where a track crosses a boulder field shortly after the Seagers lookout junction, some rocks were placed to make the it easier to traverse them.  Further up the track,
where rock hardening had previously been done, there was a large rock dragged to the site by Adrian still unused.  This was moved to harden more of the track plus additional rocks were sourced to continue the section.
On the plateau area towards at the top of the climb some unhardened sections are now starting the get muddy and a couple of these had rocks added. 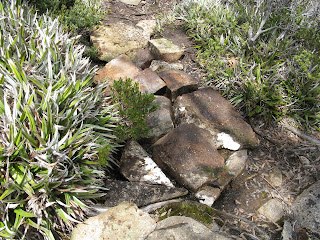 Some ends of the new planking were showing some wear and it  may be either worth applying extra paint on future boards at the ends.

Whilst in the area a check was made of the track counter on  Windy Moor which gave a reading of 1369.  This is since 6/1/2017 and the prior one was on 9/5/2017 of 1013. As would be expected the winter months usage is much lower, but overall the average for 306 days is 4.5 per day which is quite impressive.  The summer average looks likely to be about 10 per day, autumn 8 and winter/spring 2.
More photos online 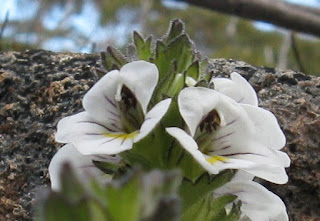