Friends of the Franklin River

Friends of the Franklin River Branch members had a great time working on the old Hydro Hut at Sir John Falls on the Lower Gordon River between December 2019 and early March 2020. The aim of restoring this old hut is to provide an appealing place for the rafters to stay at the end of their Franklin trip, instead of camping in the sensitive area closer to the waterfall.

The hut was in desperate need of care and attention and over the summer has been completely restumped, with a brand new hardwood floor now in place. The tin sheeting and internal Masonite lining have been repaired, replaced and are being repainted. The hut’s timber windows have been repaired or replaced with new ones as needed and two new skylights have been installed bringing in much needed natural light.

While there, Friends of the Franklin River branch members also removed redundant infrastructure (poly pipes), undertook weed removal (Foxgloves), and generally cleaned up the area after many decades of use by Hydro, Police, PWS and the public. Volunteers also improved the user-friendliness of the site by enhancing hut drainage, tidying up level areas for camping and outside use, and enhanced walker safety between the hut, jetty and waterfall, following a recent landslip.

Branch members also engaged with Franklin River  commercial users to encourage them towards use of the hardened hut site in preference to camping at the sensitive area nearer the jetty (their pick-up point).

Members worked alongside volunteers from the Mountain Huts Preservation Society (MHPS) to achieve the level of work accomplished. The materials for the project were funded by the PWS, Wildcare provided a small grant, and other community contributors include the West Coast Yacht Charters and Hydro.

Peter Rigozzi, PWS Heritage Officer, oversaw the SJF hut project and provided the budget for material purchases. He is very appreciative of all the volunteer efforts to achieve as much as we did over the 2019-2020 summer – early autumn period. There is still an amount of finishing off to do, but a completed hut project by the end of the year is a realistic ambition – subject to Covid-19 implications of course. In a letter to the Group, Peter wrote:

“By a rough calculation, there have been over 800 volunteer hours of actual work put into the hut, not counting travel times. This has been a massive effort that has transformed the hut from the point where some people believed it was beyond repair into a place that is structurally sound and an inviting place to stay. There is still more to be done, but the hard yards are certainly behind us.

I believe that it has been a very successful (and hopefully ongoing) partnership between Wildcare, the Mountain Huts Preservation Society and the PWS.  Once the hut is complete it will provide a much improved level of amenity and safety in this remote and beautiful spot and, when needed, a dry place for rafters to spend their final night on the river.

From a heritage perspective,  the hut will continue to provide a tangible link to the historically important stories attached to this site – it has strong links to both the stories of the intrepid dam builders and the stories of the foundation of green politics in Australia. I believe that over time it will become increasingly evident how valuable both were to the formation of Tasmania as we know it today.”

Many thanks to all of the project contributors and supporters, including PWS local staff, MHPS, West Coast Yacht Charters, and the Friends of the Franklin River Branch volunteers: Michael and Sally, Rodney and Julie, Hunter, Jim, Derek, Terry and David – well done, and what a fun time we had!

There is still some opportunity to be involved later in the year to finish off painting and install final furnishings and fit out – contact Dave Clarke, Branch President, if you are interested in this project or other Branch activities. 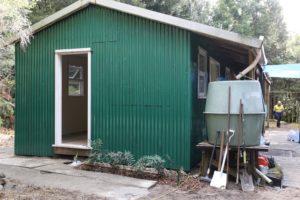 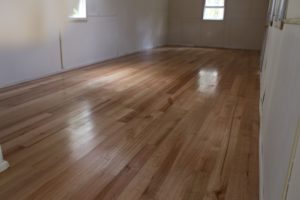 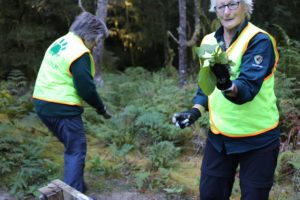 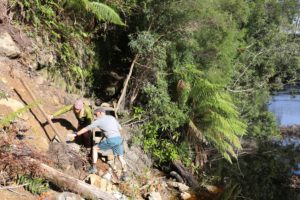 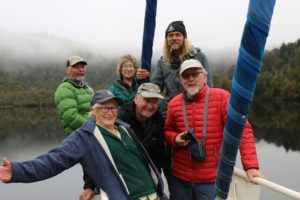