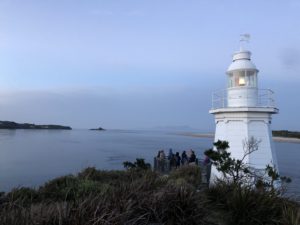 BirdLife Tasmania Convenor, Dr Eric Woehler, met with PWS and RACT staff, and tour operator Gordon River Cruises (GRC) in Strahan last month to discuss the recent decrease in Little Penguins on Bonnet Island in Macquarie Harbour. Tours have been visiting the island colony over the last decade or so, but the number of penguins ashore has decreased rapidly over the last 12 – 18 months, and the tours were cancelled when no penguins were present late in 2019. A visit to the island found some evidence of ongoing penguin use of the island, with an inactive penguin burrow containing an abandoned egg, and penguin moult feathers present in another burrow.

Discussions on the island identified a number of low-key management options for PWS that are likely to improve the attraction of the island to breeding penguins. The first was the removal of a dense patch of blackberry on the western side of the island, believed to impede the movements of penguins ashore. The second was to remove the old and unusable nest boxes and replace them with boxes built to the current design specifications.  One final suggestion was to put camera traps on the island to see if penguins were prospecting but not nesting, and to see if any other animals were present on the island.

GRC staff made their nightly observations data available to BirdLife Tasmania, a valuable record spanning 10 years. These observations will be digitised and examined for any environmental factors that may have contributed to the decreased use of the island by breeding penguins. Eric also gave a public talk on Little Penguins while he was in Strahan. Future surveys and monitoring on Bonnet Island will see further opportunities for community engagement into the near future. Thanks to PWS for hosting Eric and his student, RACT and GRC staff for open and engaging discussions, and for their willingness to share their observations on the island.