Keeping an eye on the Low Head Penguin Colony 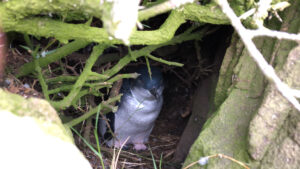 The Friends of Low Head Penguin Colony are keeping an eye on the penguin population at Low Head.

An inspection of the colony in early April indicated that the 2021/22 breeding season is close to completion with only a few adults and the last of the chicks present. The penguins have completed their annual moult and have returned to sea to build up their energy reserves after the breeding season. The colony is at its quietest before the penguins return for the next breeding attempt later this year. 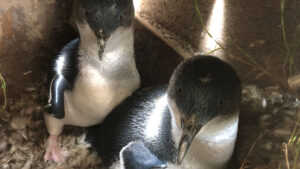 Past experience has shown that nest boxes provide a critical contribution to the safety of the breeding and moulting penguins at Low Head.

Nest boxes and igloos that were put in place during the Iron Baron oil spill in 1995 are now well beyond their useful life and during the winter months, the group intends to replace them with new nest boxes assembled by students from Port Dalrymple, Star of the Sea and South George Town Schools. 50 nesting boxes were replaced today (April 27th) with the remaining 14 to be done in a few weeks when School is back.

The Friends of Low Head Penguin Colony group used donated funds to purchase the materials, and Longs Building and Joinery cut the ply and bundled each box ready for assembly.

Birdife Tasmania in conjunction with FoLHPC will maintain ongoing surveys of the penguin population and monitor the adoption and use of the new nest boxes.

To be kept up to date with the work of this group, you can join their mailing list by clicking ‘Join the Branch’ on their branch page here.

Donations to the Penguin Cause in Wildcare’s Tasmanian Nature Conservation Fund can be made at this link.