Text by Adrian Blackman and photos by Peter Franklin,
(Secretary and President respectively of the Friends of Mount Field) 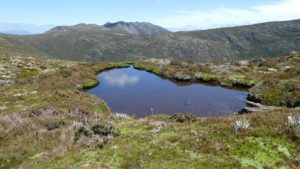 Scenery on the K Col Track

The Friends of Mount Field are pleased to announce the completion of their most recent and most ambitious project—upgrading the K Col track between K Col and The Watcher in Mount Field National Park The construction of a top quality boardwalk now allows walkers to traverse this fragile and valuable place in comfort while no longer causing environmental damage.

The project, which took four years from conception to completion, was largely funded by the Tasmanian Community Fund. Several additional contributors are listed at the end of this article. Major expenditure included purchase of timber and other materials, cost of helicopter transportation, and employment of professional track makers. Interesting statistics include:

Mount Field National Park is Tasmania’s 3rd most visited national park and attracts almost 200,000 visitors annually. For many walkers the most scenic and attractive part of the park is the Tarn Shelf with its many small glacial lakes and alpine vegetation, some rare or endemic. Fagus (Nothofagus gunnii), Tasmania’s only native deciduous tree, occurs in the area and entices numerous viewers during autumn.

There are two Tarn Shelf circuit walks—the longer one involves traversing the Rodway Range via the K Col track. In recent years with increasing use, part of this track between K Col and The Watcher (a mountain) had become significantly degraded with serious damage to plants and soil. Erosion by water (rain and snow-fall) had exacerbated the problem. Walkers made the destruction even worse by widening the track in their attempts to avoid water and mud. The length of this part of the track is 1.7 km and about half of it was in poor condition; these damaged sections were spread out over various locations along the way. 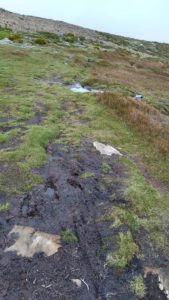 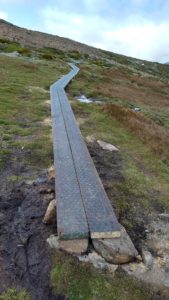 Track after having planking installed

The volunteer group Friends of Mount Field (FOMF), in association with the Parks and Wildlife Service (PWS) decided to rectify this problem. Planning commenced in 2017 and it was determined that the best solution was to construct sections of wooden boardwalk from treated pine over the seriously damaged parts of the existing track. A substantial grant from the Tasmanian Community Fund was obtained in December 2018. Field work commenced in December 2019 when two days were spent at the Osterley sawmill staining boardwalk timber (to lessen its visual impact). Packs of timber and other material were trucked to Wombat Moor in readiness for delivery to the work site by helicopter.

Boardwalk construction occurred over several sessions. After delays due to poor weather, January 17th was declared “helicopter delivery day”. The four-person track construction team (led by John “Snapper” Hughes), two FOMF volunteers and a PWS member were taken to K Col together with 19 packs of timber, equipment including tools, a small generator and a toilet, and personal supplies plus food. The timber packs were placed at pre-planned locations along the construction site to minimise carrying by hand.

Construction of the planking commenced at midday on that first day. For the first five days two FOMF volunteers helped and another came (on foot) for one day. The track construction team was first rate both with the build quality and dedication to the task. They worked in all weathers, even when rain curtailed the use of battery powered tools and they maintained long hours from 7:30 in the morning to 5:30 in the afternoon. But it was when they came upon small sections of track not earmarked for action that they shone by suggesting that they would go and carry timber to the new spots for planking to save the area from being further damaged.

PWS also had a couple of very willing and strong staff who walked there and back – between them they worked for three days on the project. For this the first (and main session) the professional track makers continued working for 12 days. Due to poor weather, their planned retrieval by helicopter was not possible and they had to walk out. A delayed helicopter trip was made two weeks later despite the threat of low cloud cover. The flight delivered more timber to the site and retrieved waste from construction and equipment.

Stage two of the boardwalk construction took place on 6th February (aided by helicopter transportation). The project was eventually completed in late March after several further day visits, again by a mix of paid and volunteer personnel (no helicopter, so old-fashioned walking was needed). During these trips the final small part of the boardwalk was constructed and more wire netting was stapled to the boards to prevent walkers slipping. 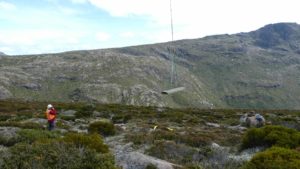 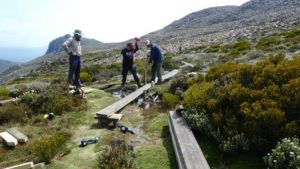 The result of all of this activity is that damaged parts of the K Col track are now protected by excellent, professionally made all-weather boardwalk sections having a total length 870 metres. Damaged track sections will slowly recover and a photo record will be kept of the ongoing rehabilitation.

This project has an overall value of $87,587 (excluding GST) and consists of actual grant money together with additional in-kind support by PWS and FOMF personnel, donations etc. Included in this is $14,394 generated from the 480 hours of work contributed by FOMF volunteers (worth $30 per hour). In addition PWS staff, sometimes working alongside the contractors, contributed 169 hours to logistical and on-ground support with an estimated value of $11,830. PWS also made a financial donation.

Friends of Mount Field gratefully acknowledge major financial support from the Tasmanian Community Fund. Vital contributions were also obtained from (listed alphabetically) the Australian Plants Society, Hobart Walking Club, Gregory Kidd, Pandani Bushwalking Club, Parks and Wildlife Service, Phyl and Bob Wyatt and Wildcare Tasmania Inc. We also thank the contractors (especially Snapper Hughes), Helicopter Resources and Timber Growers Direct. The project would not have been possible without contributions from FOMF volunteers, two of whom are worth special mention—Peter Franklin and Greg Kidd. Peter, President of FOMF, was the instigator and devoted considerable time managing many aspects of the project together with PWS. Both Peter and Greg spent multiple days (and nights) at the worksite helping with construction—sometimes under unfavourable weather conditions. 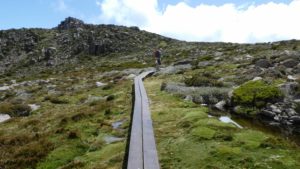